Why are robots so life-like? Many of the most advanced robots are inspired by nature. US Department of Defense

Boston Dynamic’s dog-like SpotMini robot is to go on sale in 2019. This cute and uncannily realistic canine-bot is just one of many robots that are inspired by the natural world. Human engineers increasingly look to living systems for clues to a good design, whether it be emulating an insect brain’s ability to navigate or building robots with bacterial stomachs that produce electricity.

In the video below, you can see SpotMini lean backwards on birdlike legs, counterbalance the weight of the heavy door and smoothly pull it open. The action is taken with a kind of animal grace, and for a moment its artificial origin seems to fade away. But why do we robot engineers base so many of our designs on animals? Is a dog-like robot the only sensible way to accomplish the tasks that SpotMini has been built to achieve, or are we just taking a shortcut and stealing from the natural world?

The answer is of course, both. To understand this we must think about how nature’s design came about, and also about what we want our robots to do.

The modular and symmetrical body that most animals have is a remarkable feat of natural design. It was this layout that enabled, during “the Cambrian explosion” 500m years ago, the vast diversity of complex animal forms we see today.

The evolutionary benefit of bilateral bodies has given animals with this form adaptive advantages over most rival configurations. Traits such as balance and a sense of front and back are inherent aspects of the design. Legs with hips and knees are a relatively small extension that massively increase range and capability. These attributes give animals precise control and they are the foundations of a general intelligence, allowing creatures to navigate and explore new environments and difficult terrain. That’s why nearly every animal today conforms to the plan.

Nature’s other great unifier is her efficiency. Every adaptation that could improve a species’ use of energy was explored, and wasteful variants swiftly out-competed by a thriftier cousin. We can see it in the poise of a cat’s jump and the precision of a fish’s dart, even in the rhythm and bounce of our own walking.

Animals are remarkably efficient, and adaptable to new situations and conditions. Robot designers want their creations to be similarly capable. After all, the fundamental constraints that nature has been working with over billions of years still apply, whatever the purpose is of the robots we create.

But unlike most animals, we want our robots to be effective not just in the natural environment, but also within the human domain. This means that we create robots suited for a world designed by humans.

Humans are animals, and we operate according to the properties of our bodies. The prehistoric world shaped us. Natural selection favoured our limbs, eyes, hands and even our sense of direction over long-extinct competitors. 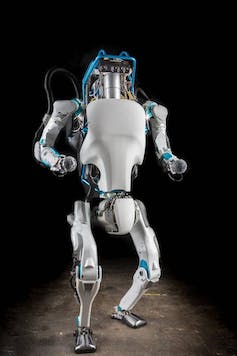 Today, the world we’ve constructed reflects this history. People rarely stop and think about it, but our evolutionary heritage is actually encoded in our doors and staircases, our signs and signals, our cupboards and our corridors. We have designed these objects around our own physical characteristics. The closer a body is to a human’s, the better it will navigate and manipulate a human world.

The clear parallels between robots and living things in physical design and behaviour invite us to wonder why these machines should be so lifelike. We should remember that, as we try to build machines that operate in our worlds of culture and prehistoric survival, we impose on them the same constraints that those worlds imposed on us. These constraints leave engineers surfing in nature’s wake, marvelling at her creativity and efficiency. And, as we demand more of our machines in the human world, it shouldn’t be surprising that they often begin to look more and more like ourselves. Whether we make a conscious choice to copy nature, or try to design an effective machine from first principles, the results are likely to be the same.

As SpotMini slips on a banana skin in a comedy fall, I laugh and sympathise with it in equal measure. Our robot designs might sometimes seem to be simple cheats stolen blindly, or even superficial pastiches of natural forms appropriated for purely aesthetic reasons. But imitation really is the sincerest form of flattery. In the case of robotics, it is a deep and respectful acknowledgement that nature’s way is hard to beat in any circumstance.