Theresa May’s new environment plan sets ambitious goals for plastic waste reduction. But there’s lots of room for slippage. One goal is to eradicate all “avoidable” plastic waste, though it’s not clear how “avoidable” will be defined. A few concrete measures are now in place, such as the 5p plastic bag charge being extended to cover all businesses in England. And, in order to tackle the spread of tiny plastic particles, the government recently announced a ban on microbeads in personal care products.

But such measures, even if adopted worldwide, wouldn’t actually wipe out these “microplastics” in the environment.

The problem is that all plastic ends up tiny. And it persists, no matter what its size. In the ocean, even the largest and most resilient bits of plastic are broken up and degraded by the waves and sunlight until eventually these chunks measure less than five millimetres across – about the size of an ant – and they are classed as “secondary microplastics”. This type of plastic, that started out as drinks bottles, fishing gear, disposable cutlery and so on, is much more abundant than “primary microplastics” that started out small, such as the microbeads found in toothpaste.

Microbeads are among the most familiar sources of tiny plastic pollution, but this means there are other less obvious sources of microplastics in everyday use. We call them “stealth microplastics”, and they include: 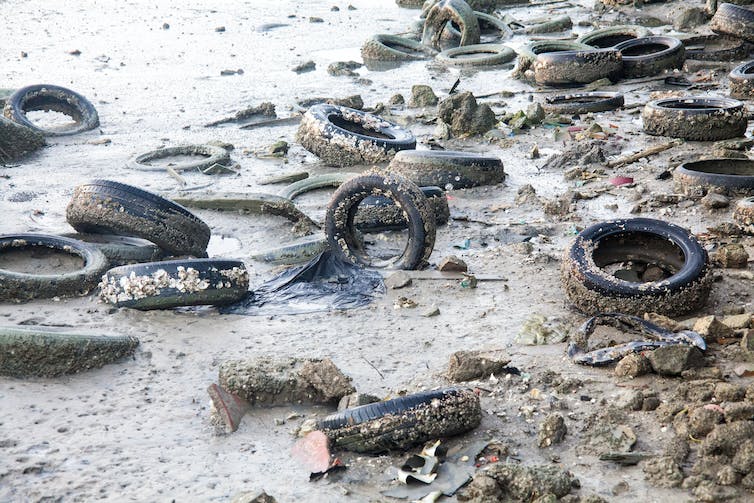 Tyres are made from rubber and around 60% plastic (styrene butadiene). The friction, pressure and heat of driving wears tyres down so much they produce an estimated average of 63,000 tonnes per year of plastic dust in the UK alone. If blown into the atmosphere, that dust can contribute to the poor air quality identified by the World Health Organisation (WHO) as a cause of premature deaths.

If it is washed into drains, rivers and oceans, it is likely to be eaten by filter feeders such as mussels, entering the human food chain. The industry could move back to natural latex, derived from rubber trees, but this too would have environmental costs: expanding rubber plantations are already “catastrophic” for endangered species in Southeast Asia.

Outdoor gear, leggings, fleeces and jumpers made from acrylic and polyester, polyamide, spandex and nylon shed up to 700,000 microfibres with each wash. Once in water, microfibres are difficult to filter out and studies have shown that these fibres are now being found in tap water in many countries.

In the US, 94% of samples tested contained fibres. Airborne, from friction or dryer lint, they settle as dust that can be inhaled and it is thought that toxins from the fibres can be absorbed through the lungs. In the environment they are eaten by fish and other animals, often in preference to food. The solution? Fitting all washing machines with filters and choosing natural fibres. 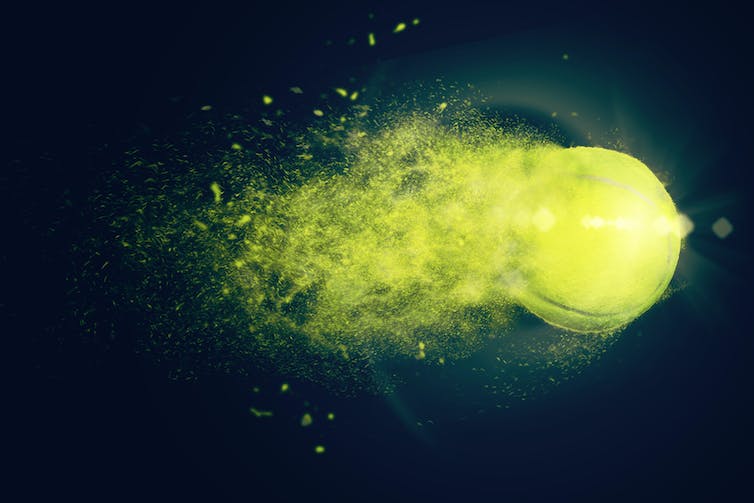 Their fuzzy outer layer is made from PET (polyethylene terephthalate), the same material that’s used to make plastic milk bottles. Just like tyres, this plastic gets worn away with use, becoming dust.

All kinds of detergents and disinfectants with scrubbing agents have microplastics such as polyethylene (PE) or polypropylene (PP). These are the same beads banned in cosmetics. It would be better to use a natural material such as ground coconut shell.

Filters are made from cellulose acetate, a non-biodegradeable plastic. They can shed microfibers and, once used, give off high levels of toxins, including nicotine. Cigarette butts are a serious pollutant in the oceans and are the most commonly recovered item in beach cleanups. 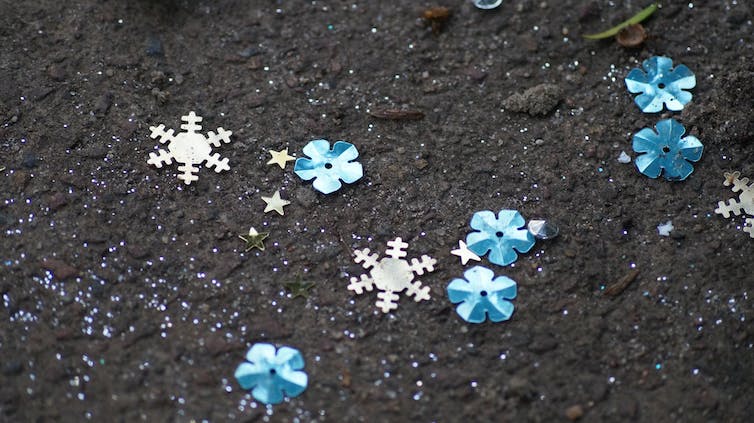 The party is over, but the glitter remains. Janine Aramillo / flickr, CC BY-SA

Beloved of kindergarten craft teachers, most glitter is made from PET or polyvinyl chloride film (PVC) and is very hard to dispose of. You could instead get biodegradable cellulose film glitter, made from eucalyptus trees.

Baby wipes, hand wipes, make-up removing wipes, all of these products are typically made from polyester, polyethylene, and polypropylene – or a mixture of those plastics and natural fibres. Not only do they block sewers and cause “fatbergs”, the plastic doesn’t break down. They are also a source of plastic fibres. A traditional all-cotton flannel is the eco-friendly choice. 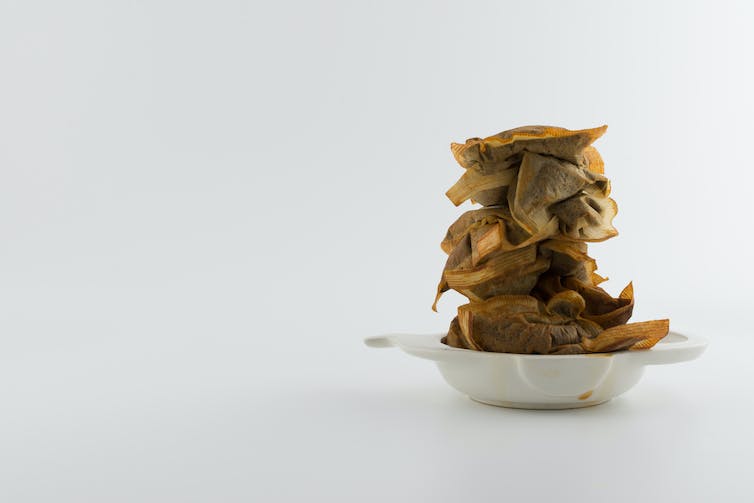 Not entirely biodegradable, many teabags actually contain a polypropylene “skeleton”. That skeleton then breaks into tiny pieces when the paper breaks down in the compost or soil. Ask the manufacturer if your brew is plastic-free or switch to loose-leaf tea.

Plastic dust from the thermoplastic paints used for road markings, ships and houses is found across the surface of the oceans. But not all paints contain plastics. Look for paints that use linseed oil or latex as binders.

Paper takeaway cups are lined with a layer of polyethylene. Like teabags, the paper element breaks down, but the plastic breaks up into tiny pieces if the cup is littered or composted. Mixed materials need to be handled by a specialist recycling facility. Or you could bring a refillable mug.

If we want to have a real impact, we need to address all plastic waste: that which we see and a lot that we can’t. There are some plastics we cannot live without, but others we could easily reject, replace or at least reduce.