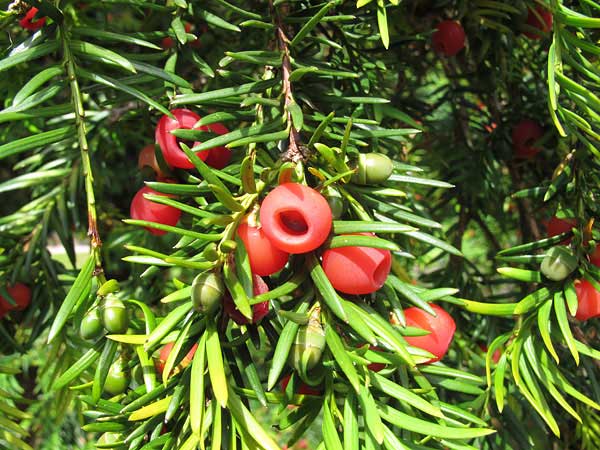 Origin: one of our three native conifers (the other two being Scots Pine and Juniper). It is native to the chalk downland of southern England and the limestones in the north. Very common in parks and gardens; commonly used as a hedging plant and in topiary. Huge and ancient trees, some over 1000 years old, can be found in churchyards. All parts of the tree, except the red fleshy covering of the seed, are poisonous.

Tree: it is broad and conic when single-stemmed, becoming irregular when multi-stemmed. Trunk can be either short or long and slightly sinuous; often covered in short sprouts.

The bark is reddish-brown and purplish, pealing away to reveal dark brown or reddish patches.

The leaflets are 2-4cm long, very dull green and shiny or dull above, yellowish-green and matt below; poisonous to cattle.

Fruits: trees are either male or female. The familiar red fruits of the female tree consist of a red fleshy cup-shaped outer covering (aril) with a hard brown nut inside. They are much-loved by birds such as thrushes and greenfinches who eat the fleshy aril but the poisonous nut passes through their gut.

Uses: today it used as a tree for ornamental purposes - particularly for hedges but the timber is used for veneers and furniture making. In the past it was the wood of choice for making longbows.

Location : especially common around Keele Hall and the Clock House.