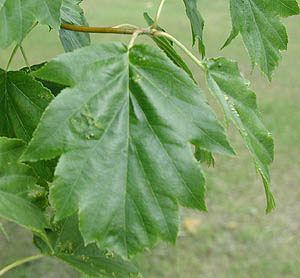 Origin: a native species where it is infrequent in woods in south and east and locally on the limestone of the south Pennines and Cumbria. Where it does occur naturally it is said to be an indicator of ancient, undisturbed ground. It is not infrequently planted in gardens.

Tree: Young trees are conic, older trees domed and spreading. The leaf is rather maple-like but, unlike maples, they are borne alternately on the stem. There are usually 3 to 5 pairs of lobes.

The flowers are white in loose pubescent heads while the fruits are brown and, in some parts, are known as chequers. They can be used to produce a type of beer.

Location : there is a copse of trees at the side of the running track by the Sports Centre - compartment 56H, square I6.