Origin: a native of mid-western and south-eastern USA, it was introduced to Britain around 1650. It is frequently planted in parks and large gardens in the southern half of the country. In its native habitat it is one of the largst trees, reaching 60m with a trunk of 3m diameter. It grows fast and straight, often with no side branches for a considerable distance, making it a valuable timber tree. 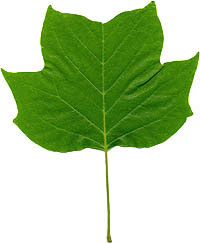 The flowers do indeed look somewhat like a tulip but they do not appear until the tree is about 25 years old. They can go un-noticed as they are often hidden by the large leaves.

Uses: it is a major honey plant in eastern USA while the soft, fine-grained timber is widely used.