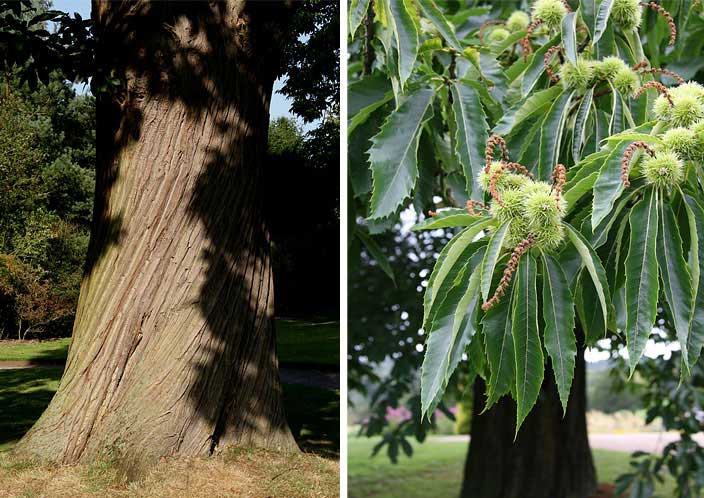 Origin: it is a native of S. Europe, W. Asia and N. Africa and was probably introduced into the UK by the Romans. The fruit was a staple diet of the legionaires in Italy but the fruits do not develop as well here. It is frequently planted in parks and larger gardens.

Tree: young trees are rather conic but older trees become tall-domed or widely spreading with huge lower branches which often have to be removed in maintained sites.

The bark is smooth at first becoming deeply fissured with ridges becoming more and more spiralled with age (photo).

The leaves are long and pointed, 15 pairs of coarse veins ending abruptly in a spined tooth (above).

The male flowers form long thread-like catkins in July which, as they mature, drop off. 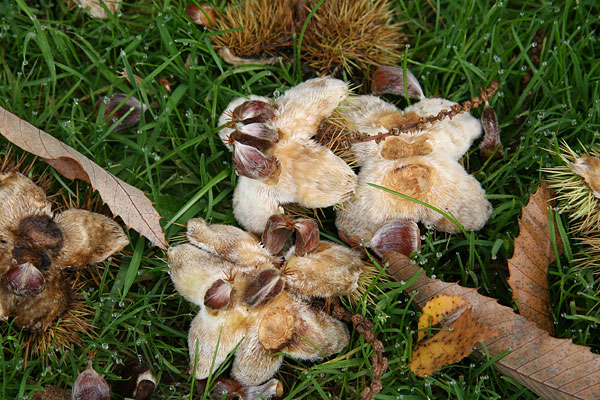 The fruits are in bunches of 2-3 in a light green husk covered in sharp spines. Usually two nuts inside; dark shiny red-brown in colour.

Uses: the timber is strong and durable and is mainly grown for joinery, cabinet making, coffin boards, poles and fencing.

Location : Trees are long-lived with some here dating from the Elizabethan period. They are planted widely around the campus but some of the oldest and most magnificent are along Clock House Drive and the Terrace.