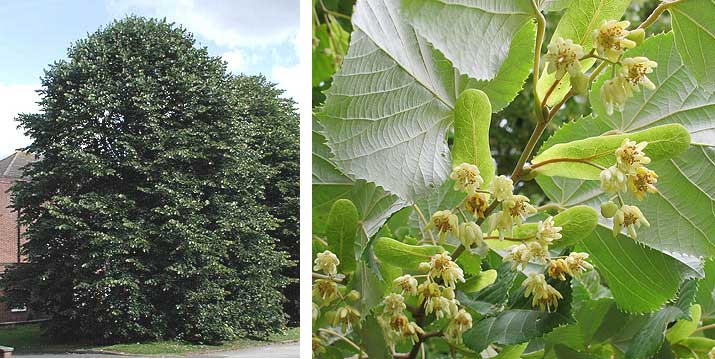 Origin: a tree of SE Europe and SW Asia; introduced to Britain in 1767. It is frequently planted in towns, parks and larger gardens.

Tree: younger trees are almost hemispherical (look at those on the road in from Keele village); older trees a broadly domed with some branches steeply descending as in the specimen illustrated.

The leaves are thick, dark-green above with thick whitish pubescence below; rounded and rather pointed or acuminate at the tip. They have rather coarse, forward-pointing teeth

The flowers, which appear in July with 7 - 10 on a 3cm stalk, are very sweet smelling. The fruits are 8-10mm dia. with a yellowy-green bract 9cm long.

Location : A number have been planted either side of the road to Keele Village; another is outside Walter Moberly Hall; compartment 42A; square L7; tag 3610.