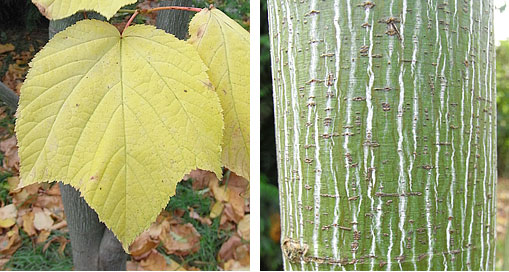 A native of Nova Scotia to Georgia, it is the only American Snake-bark maple. It was named after the American State of Pennsylvania but, when the name was first published, it was misspelt - hence the missing "n" in the scientific name! It can grow to 17m but more usually to 10m. In its native habitat it is very shade tolerant and more an understory shrub, rarely becoming a canopy tree.

Uses: Grown as an ornamental tree in UK but in its native habitat foresters sometimes consider it to be a pest tree because its shade tolerance makes it difficult to control and it is often present in great numbers in the understory.

Location : One in the special collection - compartment 24;square K10.