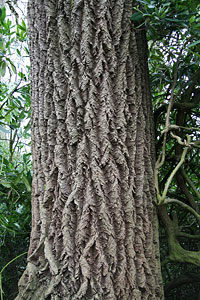 Origin: Grey Poplar is a hybrid between the White Poplar P. alba and the Aspen P. tremula. As such it has features of both parents to varying degrees.

Leaves: from the White Poplar it gets the felty covering of the underside of the leaves. This gradually wears off to leave a thin greyish coating. From the Aspen it gets its more rounded leaf shape. The leaves of White Poplar tend to be more deeply lobed, almost maple-shaped at times. In the autumn the leaves turn yellow.

The bark is quite stunning. It is covered in diamond-shaped indentations (lenticels), as if hammered with a chisel, when young becoming deeply furrowed when older.