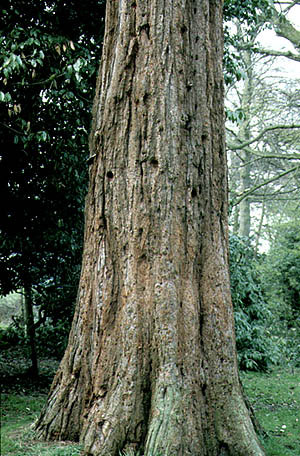 Origin: it is native to a few isolated groves on the western slopes of the Sierra Nevada in California which include such well-known trees as "General Sherman" which rises to 82m. It was introduced to the UK in 1853.

Tree: it is tall, narrow and conic; mature trees usually standing well above all others. Middle branches are long and downswept, becoming upswept at the ends. 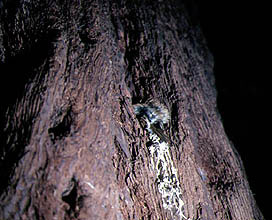 The bark is reddish to reddish-orange, exceptionally soft and fibrous being designed to withstand the forest fires that ravage its homeland. The soft bark often has small excavations in it. A careful look may reveal bird droppings at the base. These are roosting holes of Treecreepers - one of which can be seen in its hole in the photo.

The foliage of the outer branches is hard and cord-like, being composed of dark green scales (photo). The crushed leaves are said by some to smell of aniseed.

The cones, which are borne on long stalks, are ovoid and slightly flattened, green at first, becoming dark brown.