Common Ash bud with flowers and seeds or keys

A native tree on base-rich and damp soils, especially in limestone areas.

The buds are characteristically black; the flowers emerging before the leaves. 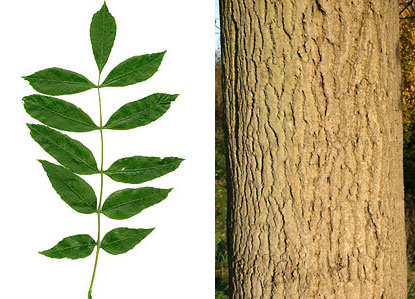 The fruits are the familiar ash keys and are usually abundant. They are approximately 4cm X 1cm, green at first turning brown when mature and hanging in dense bunches.

Leaves : have 9 to 11 leaflets, sometimes more. They are tapered at the base, slender-pointed, toothed, dark-green and hairless above but with fluffy brown down at the sides of the lower part of the mid-rib. The terminal leaflet is stalked, the others hardly at all. It is usually one of the last trees to come into leaf. It tends to respond more to day length rather than temperature. So, when a hot spring forces other trees into leaf early, the Ash remains bare.

The bark is smooth and grey when young but later develops a network of interwoven ridges. 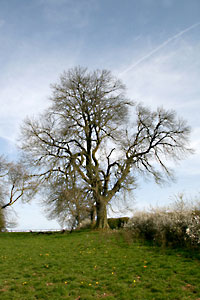 Tree : It is a tall, domed tree with open branches which are strongly ascending from the trunk. The smaller side branches descend before being upswept at the tips, giving the tree a characteristic silhouette in winter.

Location : fairly common around campus. There is a stand of them between the ringroad and Horwood; compartments 62b and 62c; square O8.