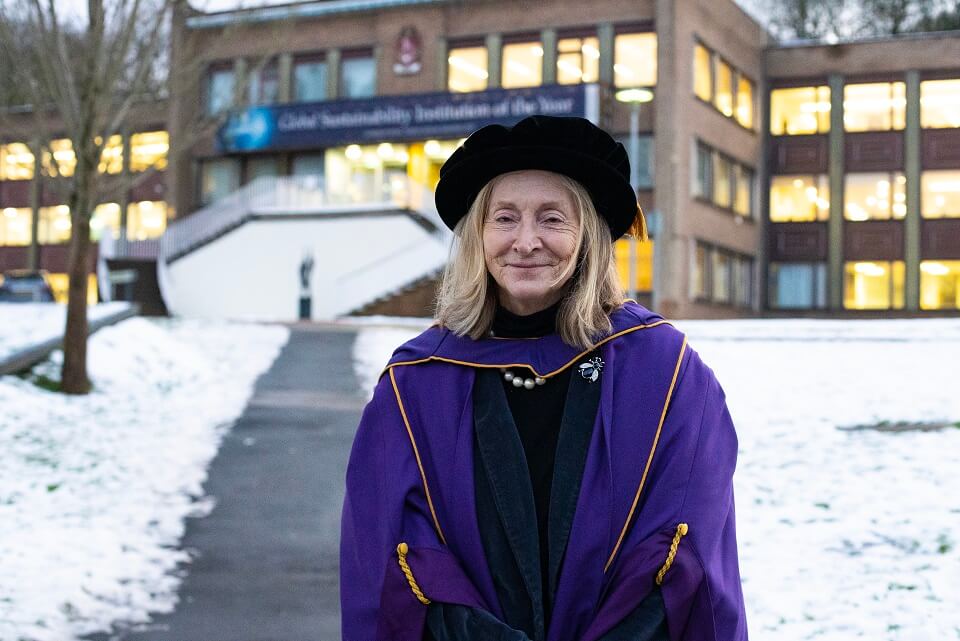 A distinguished crossbench peer from the House of Lords has received an honorary degree from Keele University at this year’s winter graduation ceremonies.

Baroness Rosie Boycott, a member of the House of Lords who is dedicated to campaigning for environmental and social causes, was made a Doctor of the University in recognition of her distinguished career history as a journalist, publisher and author, as well as her commitment to communicating the importance of food in improving health, tackling childhood obesity, and helping to reduce carbon emissions contributing to climate change.

Baroness Boycott was appointed as a crossbench peer in 2018 after chairing the London food board since 2008. She has had a long and distinguished career history as a journalist, publisher and author, and as a champion of women’s rights. She is currently a media advisor for the Council of Europe, is chair of Feeding Britain and Veg Power, a trustee of the Hay Festival, a trustee of the Food Foundation, a trustee of StreetSmart and the President of the Guild of Agricultural Journalists. She is a founding member of Peers for the Planet and is appointed to the environment committee in the House of Lords.

Upon receiving her Honorary Doctorate, Baroness Boycott said: “Saying yes is a good policy, most of the time. When someone asks you to do something that genuinely interests you, just go and do it, because you don’t know who you’re going to meet, what kind of door it’s going to open in your life.

“I give you all of my congratulations, many many thanks for accepting me into the Keele community.”