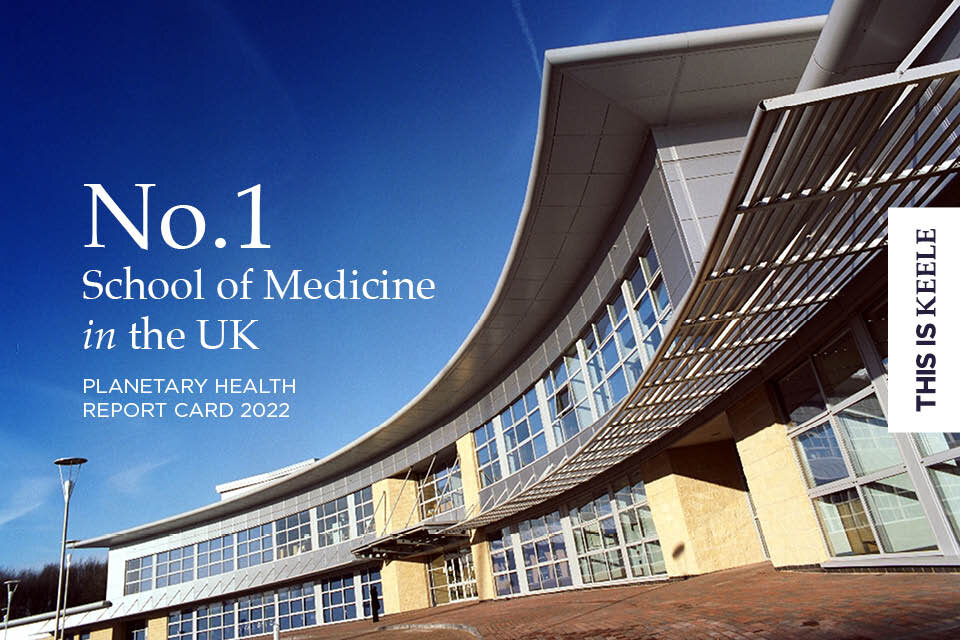 Keele University’s School of Medicine has been ranked No.1 in the UK in the Planetary Health Report Card for the second year running.

The School not only topped the table again but also improved on its overall score from last year in the student-led initiative which aims to introduce climate change and sustainability into medical school curricula.

The Planetary Health Report Card was founded by medical students and faculty mentors at the University of California San Francisco’s School of Medicine, in order to track work done by institutions to improve planetary health engagement and to inspire medical schools to focus on the importance of climate change and sustainability in healthcare education.

In their assessment of Keele, they highlighted the University’s "strong research focus" on sustainability and factors that affect planetary health, and praised its carbon neutral efforts and renewable energy projects. They also highlighted the Medical School’s links with several community organisations that provide placements for students, and the University’s involvement with various organisations aimed at promoting sustainability and planetary health to the local community.

Hundreds of medicine students from 74 medical schools in the UK, US, Canada, Germany, Japan and Ireland took part this year and measured their institutions against metrics including the curriculum, research, community outreach and advocacy, support for student-led planetary health initiatives and campus sustainability.

This success reflects Keele’s commitment to embedding sustainability across all of its campus operations and builds upon the University’s recent achievements, including opening its own renewable energy park on campus.

Keele’s Institute for Sustainable Futures drives research into issues such as climate change, food security and clean energy on a local, national and global scale, and sustainability forms a crucial part of teaching and education at Keele across the whole curriculum.

Lauren Franklin, a fourth-year medical student who led Keele’s submission, said: "I'm really proud of the progress that has been made over the last year and I’m grateful for the support of staff while researching for the report, but acknowledge that there are still areas to work on in the upcoming year. The main reasons our score increased were due to the creation of a sustainability working group, as well as the creation of a sustainability specific medical school webpage and hosting a meeting on sustainability for Society for Academic Primary Care.

"In order to fully prepare current students for working in an NHS striving towards the Greener NHS goals, the inclusion of planetary health and sustainability within the curriculum is essential and I am proud to be part of an institution that prioritises that."

Professor Christian Mallen, head of Keele School of Medicine, said: "I'm absolutely delighted that the School of Medicine have performed so strongly on the planetary health scorecard. Sustainability is incredibly important to Keele and it is a real credit to Lauren and our students who have really driven this forward."

Last month, a pioneering renewable energy park at the University producing up to 50% of the campus’ electricity was officially opened. The Low Carbon Energy Generation park, built in partnership with low-carbon technology specialists EQUANS, features an array of 12,500 solar panels and two wind turbines, which generate clean, renewable energy for the Keele campus and neighbouring communities.

Professor Mark Ormerod, Deputy Vice-Chancellor and Provost, and institutional lead for sustainability, said: "I’m delighted that our School of Medicine has not only been ranked number one in the UK in the Planetary Health Report Card for the second consecutive year, but has further improved on its overall score from last year.

"The report shows strong performance in all areas, including the University's research focus on sustainability and factors that affect planetary health, as well as recognising our strong institutional commitment to sustainability and significantly reducing our carbon emissions, including through our new campus Renewable Energy Park, which is generating at least 50 per cent of our campus electricity needs. Tremendous credit is due to Lauren and our medical students who have played a key role in this impressive achievement."