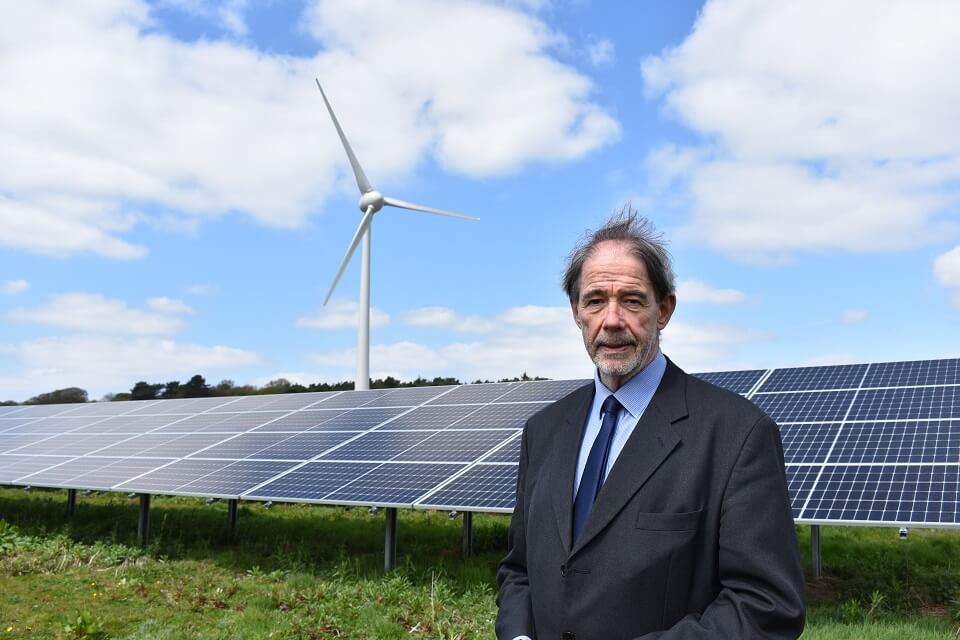 Keele’s outgoing Chancellor has said he is sad to have reached the end of his tenure with the University, saying he has learned a huge amount during his time in office.

Sir Jonathon Porritt, the prominent environmentalist, was reflecting on his time as Chancellor of Keele University, as he prepared to step down following 10 years in the role.

Sir Jonathon said he had been impressed and proud of Keele’s success during his time as Chancellor, particularly relating to Keele’s record on sustainability, saying it was a testament to the hard work of the teams at Keele.

He said: “Last year when we got awarded as the Sustainability Institution of the Year internationally, that was a massively proud moment for colleagues, because a lot of work has been going on during that time and the awards keep coming in. It’s a tremendous acknowledgment of the work that goes on.”

He was also speaking ahead of the official opening of Keele’s Low Carbon Energy Generation park, his last engagement as Chancellor, adding: “When it’s fully operational that will provide around 50% of the campus’ electricity, so that’s an extraordinary thing, and very few universities have cracked that one.”

Sir Jonathon also delivered a final lecture during graduation week highlighting the “existential threat to humankind” posed by climate change, and said that universities have a key responsibility to nurture young people and make sure they are equipped to go out into the world and tackle these huge social issues.

April's graduation ceremonies marked the final degrees conferred on graduates by Sir Jonathon, and he encouraged the graduating students from all disciplines to take an active role in tackling social issues such as the climate crisis.

Sir Jonathon said: “In my graduation speech I use this phrase: don’t be a bystander. Don’t think somebody else is going to sort this out on your behalf, because they probably aren’t, and whatever else happens this climate emergency is going to be in your life for the rest of your life, so you need to be part of that process, you need to be engaged in it.

“People do have to realise that their lives are going to be influenced by this, and as the years tick by, they will be influenced more and more disruptively, so the time to start thinking about that is now as young people start out on their career paths - whatever they might be - and to think for themselves what the opportunities are to bring that challenge into their lives and to address it actively rather than passively watch other people get onto it.”

Professor Trevor McMillan, Vice-Chancellor of Keele University offered his thanks to Sir Jonathon, and said: “Jonathon has been our Chancellor for over 10 years and has conferred awards on well over 6,000 graduates at Keele during that time.

“As we all know Jonathon has a passion, knowledge and a conviction in relation to the enormous challenge that the world now faces through climate change, and because of him our students, our graduates, and the university, has a much more mature and impactful approach to the sustainability challenge than we could have ever had without him.

“We are enormously grateful for his challenge and the support he has given us, and we hope that Keele will maintain a connection with Jonathon well into the future.”