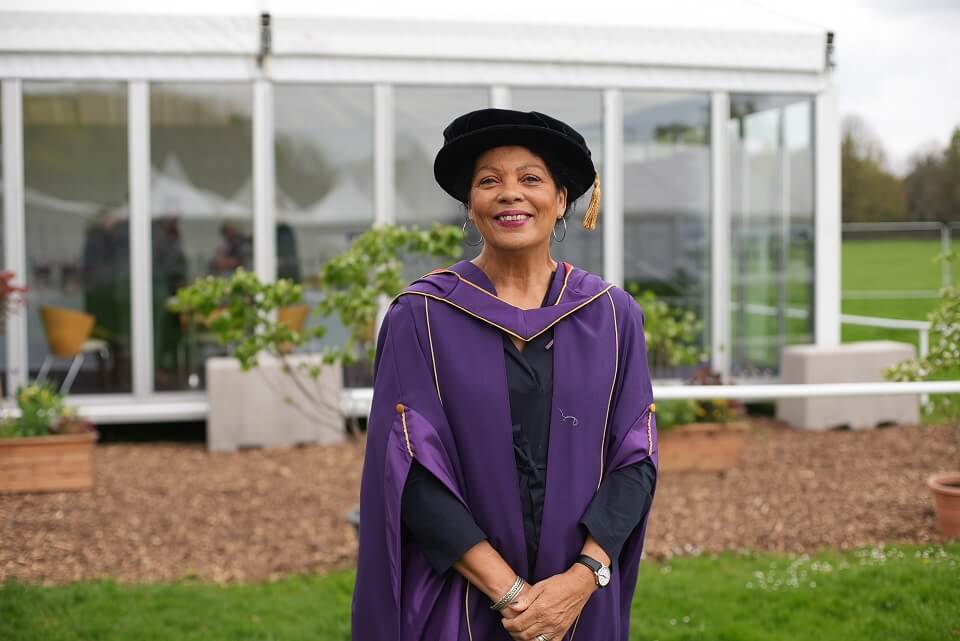 A prominent academic and equalities campaigner has returned to Keele University this week to accept an honorary doctorate in recognition of her work to change public policy in Wales.

Professor Charlotte Williams OBE served as the Head of Keele’s School of Public Policy between 2006 and 2012, and returned to campus for this week’s graduation ceremonies to receive an honorary degree.

She was made an honorary Doctor of Letters in recognition of her outstanding contribution to debates about the nature of multiculturalism, and to the integration of black and minority ethnic histories, identities, and cultures into the everyday learning of schoolchildren.

Professor Williams said: “It’s a wonderful recognition from the University. I worked here between 2006 and 2012 and to be recognised for the work I have done subsequently, it’s just wonderful, and it was really lovely to be in front of a congregation after so long!”

Professor Williams was awarded a personal chair at Keele University in 2007, the same year she was awarded an OBE in the Queen’s New Year’s Honours List for services to ethnic minorities and equalities in Wales.

She has held numerous ministerial public appointments on taskforces and working groups in the UK and specifically in Wales, and her research into equality in public appointments in Wales and access to justice in Wales resulted in the major equality bodies revising their policy and practice.

Her work campaigning to have black, Asian and minority ethnic perspectives included in the Welsh curriculum last year resulted in a change in policy at the highest levels, with the Senedd (Welsh Government) mandating that such perspectives would be included in the curriculum for every school child in Wales, an achievement she said she was very proud of.

Having been promoted to professor during her time at Keele, as well as Head of School, Professor Williams said she was grateful that Keele “took a chance on her”, as the leadership skills and insights she learned during her time here have been carried forward into her work in public policy, which has resulted in major policy shifts in Wales. At the time of her promotion in 2007, Professor Williams was one of fewer than 25 black female professors, out of around 23,000 professors in the country that year.

She said: “I was part of a cohort of just 25 black female professors out of about 23,000, so it was quite an incredible recognition and a very important one, and one that I associate with being back here today.”

Her advice to graduates was to have confidence and pride in their own abilities, saying: "I have carried with me this mantra about the “four Ps”. Persevere – always keep going; put your head above the parapet and take an opportunity if it’s offered to you; be proud of who you are – valorise yourself as being important; and, in that very feminist tradition, pull others up with you as you go.”