Theatre boss urges graduates to embrace creativity in everything they do 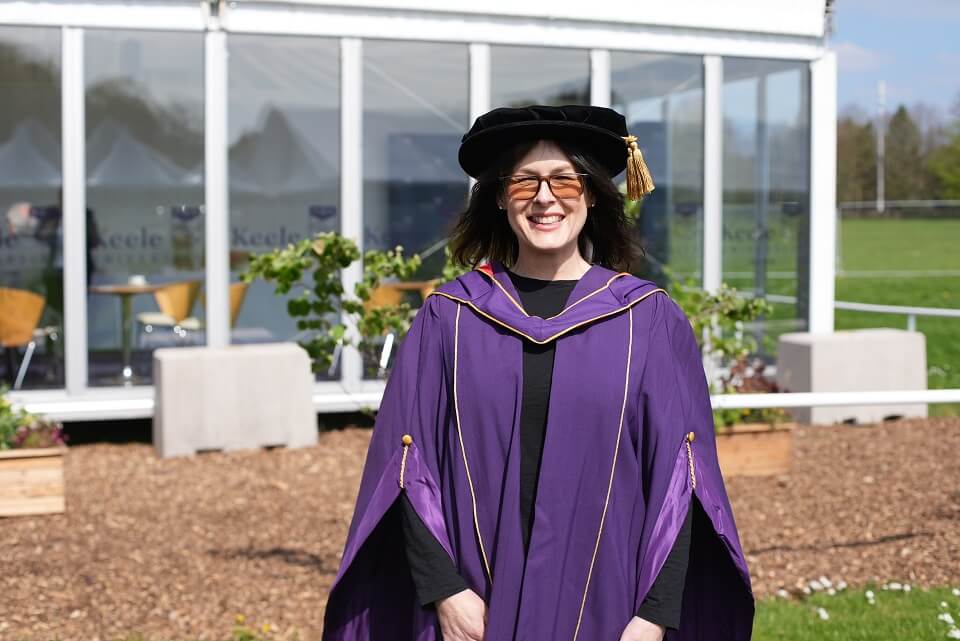 The managing director of a renowned Staffordshire theatre has urged Keele’s graduates to embrace their creativity, no matter what their academic discipline or career path.

Fiona Wallace, Managing Director of the New Vic Theatre in Newcastle-under-Lyme, was speaking as she received an honorary degree at Keele’s recent graduation ceremonies, becoming a Doctor of Letters in recognition of her outstanding contribution to artistic, cultural and civic leadership in North Staffordshire.

Fiona praised the partnership between the University and the theatre in promoting regeneration, inclusion, and wellbeing in the local area, and spoke of her pride at receiving her honorary degree.

She said: “It’s an amazing feeling to be receiving an honorary degree at this time from Keele. Keele is such a good partner with the New Vic and the theatre that we work with across the community, and to have that recognised through this degree is an amazing thing. We have survived through a pandemic by being creative and I think Keele is a creative university as well, there’s been a real strength of the partnership with that.”

Among the New Vic's many recent projects is the stage show Marvellous, based on the life of Keele’s own Neil ‘Nello’ Baldwin, and a production which Fiona said further emphasised the positive connection between Keele and the New Vic.

She said: "Our artistic director Theresa created that play with Neil, and what a joy it was to have that on stage. During the pandemic it was cancelled twice and I think we were all so excited to get the play on stage. Neil is such a big part of our life at the New Vic now but I know how much of a part of Keele life he has been for so many years and that’s all part of that story, and it’s a story that we’re hoping to take to the national stage as well, and bring back at some point.”

Reflecting on her success in forging a career in the creative sector, Fiona added that there is a role for creativity in all professions, not just the arts, and she encouraged the graduating students to embrace their creativity and think about how it might help in their chosen careers.

She added: “My advice to students would be to think, what does creativity mean to you? That doesn’t just mean the arts, it means how you think about your life and your work. Creativity is at the heart of problem solving, inventing, and also having fun, so everyone would value creativity, and students should find that creativity for themselves and use it for their own benefit.”