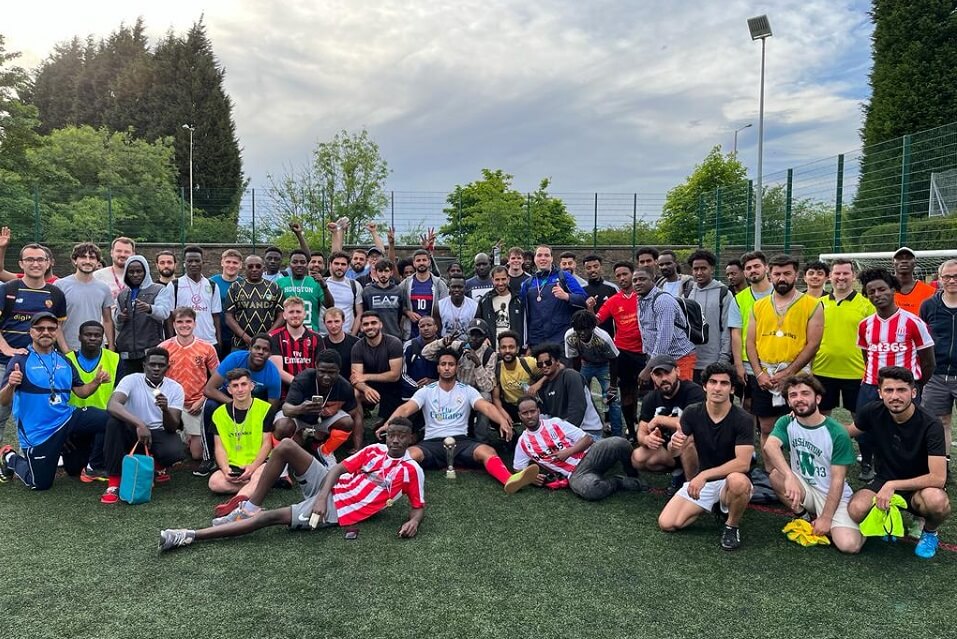 Refugees from around the world have been engaging with their new community in a football tournament on Keele’s campus which aimed to break down barriers and improve their integration.

Held as part of the nationwide Refugee Week, the eight-a-side tournament was held in partnership with the University and the Students’ Union, with support from the charity ASHA North Staffordshire.

Refugee teams from Stoke-on-Trent, Crewe, Derby and Burton-upon-Trent took part, as well as a team made up of Keele students.

The aim of the tournament was to promote an understanding among the local community of the plight of refugees and asylum seekers, encourage community cohesion, and overcome language barriers through sport, as well as helping refugees in the local area to integrate with their new community.

It also aimed to break down aspiration barriers among refugees and asylum seekers, many of whom wrongly believe that they have no access to higher education.

Godefroid Seminega, Service Manager at ASHA North Staffordshire, helped to organise the event and added: “It’s really important that this tournament is happening as we approach Refugee Week. Events like this provide a great opportunity for people to integrate with their new communities as they adapt to their new lives, and we hope to be able to stage more events like this in the future.”

Staff and students at Keele’s Language Centre have also been supporting these refugees over recent months by offering English language lessons, to further help them adapt to life in the UK.

Hinna Sheikh, Race Equality Officer at Keele University said: “It’s such an honour for us to be hosting this football tournament with refugees from local and surrounding areas coming to take part. We hope that the tournament will be a positive experience for all those taking part and an opportunity to break down barriers through the medium of sport.”

Russell Clark, Director of Keele Language Centre said: “Having Keele students and staff meet and socialise with refugees has been a fantastic experience for everyone involved. Keele has always championed inclusivity and diversity and we’re in a unique position to be able to reach out and offer support to refugees and to help them develop the skills which not only help them integrate, but which also allow them to aspire to studying at university.”