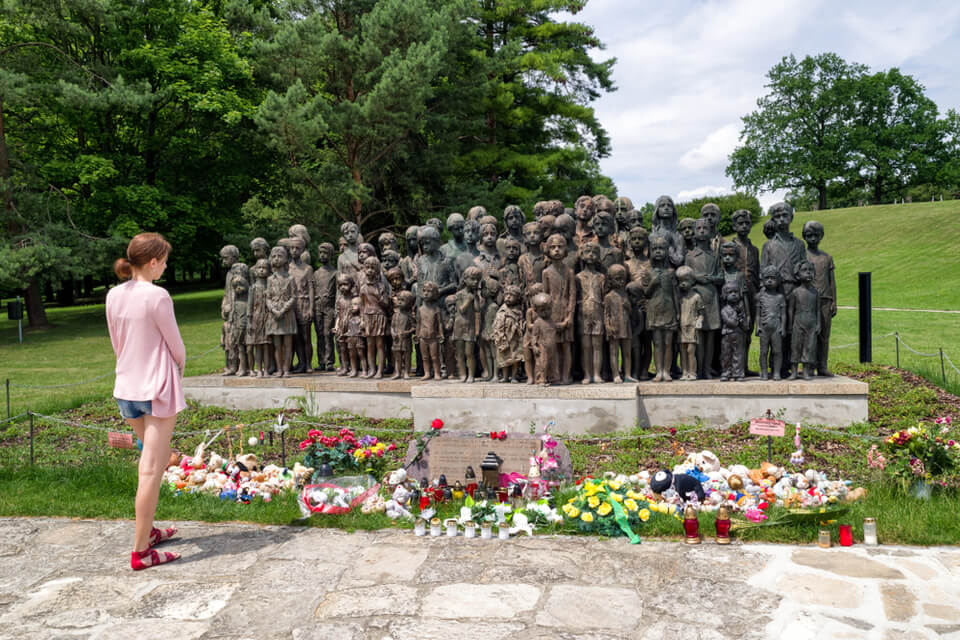 Professor Aristotle Kallis, from the School of Humanities, writes on the 80th anniversary of the Nazi atrocity.

The register of Nazi atrocities is distressingly long and well-documented. Every country occupied by the Third Reich during World War II has its own devastating stories to mark - stories of cold-blooded mass murder; of villages and towns literally obliterated; of communities uprooted, dispersed, and destroyed without leaving behind a trace or witnesses. On the night of 10 June 1942 the village of Lidice, located a few miles outside Prague in what is today the Czech Republic but was then the Nazi-controlled puppet Protectorate of Bohemia and Moravia, became the site of one of the most wicked episodes of Nazi brutality: in a paroxysm of vindictive and pitiless violence by the SS approximately 340 inhabitants were murdered, on the spot or after they had been deported to the Nazi-operated extermination camps. Those who survived suffered the fate of forced dispersal and detention, with a small number of children that were earmarked for 'Germanisation' ending up with German families or in the orphanages of the Lebensborn programme.

The fate of Lidice was sealed in the immediate aftermath of the assassination of Reinhard Heydrich, the de facto leader of the Protectorate and one of the chief architects of the Holocaust. The clandestine resistance operation, code-named 'Anthropoid' and planned in London by the Czechoslovak government-in-exile and the British Special Operations Executive, took place on 27 May 1942. It was a success: Heydrich's convoy was intercepted by the Czech resistance operatives at a junction in the suburbs of Prague; Heydrich was wounded in the attack and died a few days later in the hospital. In a token investigation conducted by the Nazi authorities immediately after Heydrich’s death Lidice, together with the village of Ležáky, were tangentially implicated in the assassination plot. Evidence did not matter, however. Hitler's furious demand for harsh retaliation needed immediate symbolic scapegoats. Singling out Lidice, in spite of the patchy evidence, as the primary target of the brutal reprisals took priority.

What followed was a terrifying spasm of total annihilation lasting for months. The village was surrounded and sealed off in the late hours of 9 June. By the following afternoon all male inhabitants over the age of 15 (173 in total) had already been executed. Women and children were forcefully removed to a nearby makeshift camp while awaiting deportation. On 11 June a terse German broadcast offered the first glimpse into what had already happened:

As the inhabitants of [Lidice] have violated in the crudest fashion the laws, the male adults have been shot, the women have been taken to concentration camps and the children removed in order to be given the appropriate education.

Ravensbruck concentration and forced labour camp became the destination for the c.190 deported women of Lidice; about 40 of them died there. Of the estimated 100 children that were removed from the village only a handful survived. The majority were deemed 'unsuitable' for 'Germanisation' and moved to a concentration facility in Łódź with the chilling order "no special care [for them] is desirable." Barely a month later they were handed over to the Gestapo and transported to the Chelmno extermination camp, where more than 80 of them were gassed.

The final episode in the terrible fate of Lidice took months to complete but reveals the full extent of the Nazi vindictive mania against the village. Teams of workers worked methodically to erase every single trace of life in the village. All houses were set on fire and then obliterated with explosives. Animals were killed, roads erased, building foundations dug up, surfaces covered with new soil and plants. Even the dead were exhumed from the cemetery, the tombs and remains destroyed. There was a chilling coda to the Nazi broadcast that announced the retaliatory action against Lidice:

The buildings in the village have been razed to the ground and its name erased [added emphasis].

"Ausgelöscht" - this is the chilling word used in the original German text: to erase, to eliminate, to expunge and terminate. As if mass murder on the spot and later in the camps, the uprooting of its entire community, and the wanton destruction of every vestige of life were not enough to satiate their vindictive furore, the Nazis willed a second crushing death for Lidice - a death that was permanent, irretrievable, total. In seeking to efface the village and 'erase' its name the Nazi authorities also wanted to consign Lidice in a void of silence and oblivion, where all the threads of individual and community life would be severed and destroyed without a trace. By setting up an elaborate industry of erasure, where even the dead and their memory would be obliterated, they wished their crimes against the community of Lidice to become a non-event, expunged from history and collective memory as if the massacre had never happened, as if Lidice itself and its people had never existed.

In this last endeavour they did not succeed. News of the brutal Nazi operation against Lidice travelled fast generating an international outcry and spurring local communities into action. The city of Stoke-on-Trent, led by the initiative of Polish-born local GP, councillor, and future MP Sir Barnett Stross, and the North Staffordshire Miners Association started a campaign with the poignant slogan 'Lidice shall live'. Stross was already a seasoned social campaigner and it was his commitment to improving workers’s health that had earned him the respect of the local workforce. Their response to Stross’s plea for support was humbling: in an act of extraordinary solidarity with a fellow mining community the Staffordshire miners and workers donated a day's wages per week to help the rebuilding of the village. Their contributions raised an extraordinary fund equivalent to approximately one million pounds in today's value.

The campaign for Lidice was officially launched with an event held at Victoria Hall in Hanley, Stoke-on-Trent, in early September 1942. It was addressed by the exiled Czechoslovak president Edvard Beneš and attended by thousands of local supporters. Later Stross also launched an open call for the creation of a special collection of artwork donated by international artists in memory of and protest to the Nazi brutal campaign to wipe out Lidice. His vision for an gallery of art on the grounds of the rebuilt village finally came to fruition in 2003. Meanwhile, across the Atlantic, a housing settlement in the US state of Illinois originally called Stern Park decided to rename itself Lidice in order to "perpetuate the name" of the destroyed Czech village.

Lidice did and does live as community, memory, and indeed name. Following the liberation of Czechoslovakia the restored national government decided to rebuild and revive the village a mere 300 metres from where the ravaged settlement once stood. Another campaign spearheaded by Stross helped locate the surviving children of the village and bring them back to the new Lidice. The initiatives launched by Stross and embraced by the local community forged a very special relationship between Stoke-on-Trent and Lidice that thrives until today. On this eightieth anniversary of the massacre and of the start of the 'Lidice shall live' campaign we owe it to all of them - to those who perished, to those who returned, and to all those across the world who vowed to keep the name of Lidice alive - to cherish and protect the memory of what unfolded on that night in June, in an unassuming mining village at the heart of a 'civilised' continent, in the middle years of a celebrated 'century of progress', perpetrated by humans against fellow humans.