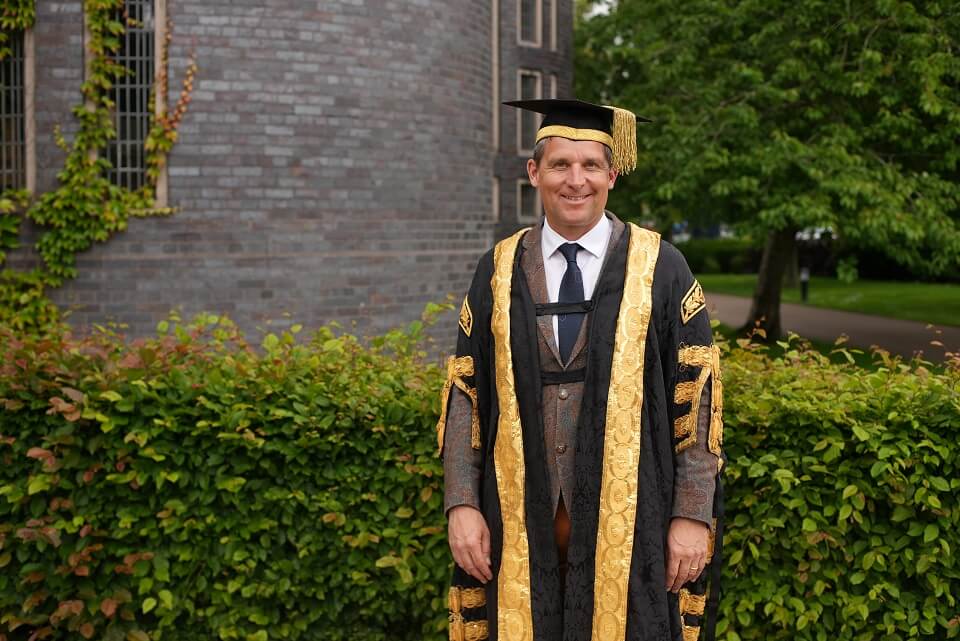 James Timpson OBE has been officially installed today as the new Chancellor of Keele University.

The chief executive of Timpson, one of the UK's most socially responsible retailers, received the Chancellor's ceremonial robes and mortarboard and took the oath of office at a ceremony in the Keele University Chapel today.

He is the University's fifth Chancellor, taking on the role from prominent environmentalist Sir Jonathon Porritt, who has held the post since 2012.

After the ceremony, James gave his inaugural lecture as Chancellor in the University's Westminster Theatre, where he spoke about his innovative approach to recruitment and empowerment in the workplace, including the employment of ex-offenders for which his company has been widely lauded.

James said he was looking forward to embedding himself within the University and being an ambassador for the institution.

He said: "It's a massive privilege for me and my family to be associated with this University and I'm really looking forward to getting stuck in. There were many things that attracted me to Keele, one being I like the fact it's not conventional, like myself and my business. I like the culture of the University and how it’s very outward looking and is prepared to be brave, and to me that's important.

"I see this as a wonderful opportunity to help people, make change and question things, and I'm looking forward to supporting the team, being there as an ambassador for the University, and also maybe a shoulder to cry on at some point. I see everything I do as being for the long-term and that's what really appeals to me. It's not about just coming in for a couple of years but being part of an organisation and becoming embedded within it."

The Chancellor is the ceremonial head of the University and, as such, acts as a figurehead and an ambassador, working with the Vice-Chancellor and other senior officers to promote the University's achievements regionally, nationally and internationally. One of James' first duties will be to preside over graduation ceremonies in July where he will confer degrees and other academic awards.

As well as being a successful business leader, James is the current Chair of the Prison Reform Trust and actively supports a number of prison charities and groups. His passion and enthusiasm for business, people, and the wider community was recognised in the 2011 Queen's Birthday Honours List, where he was awarded an OBE for 'Services to Training and Employment for Disadvantaged People'.

He was also the driving force in setting up Employment Advisory Boards in prisons, which act as a link between prisons and employers, making sure that offenders use their time in prison to gain the skills and links to job opportunities they need to head straight into stable work upon their release. They have already been established in 40 prisons and will be up and running in all 91 'resettlement' prisons in England and Wales by April 2023. Currently, around 10% of Timpson's employees are ex-offenders.