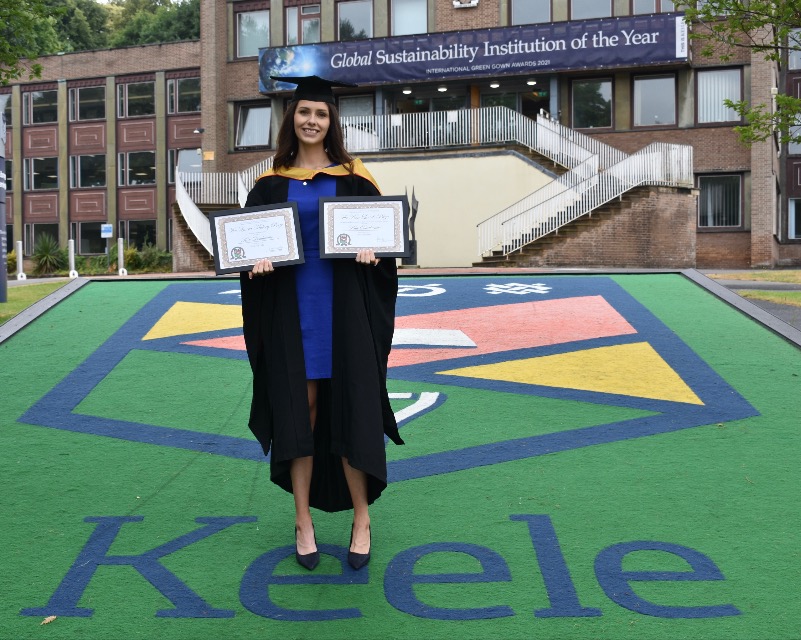 When Kate Douthwaite left college at 18, she thought her journey in education had come to an end.

She hadn't found her A-Levels particularly inspiring and didn’t think university was for her, so she got a job because it was what people around her usually did.

Kate landed a position at Keele University, working as a business administration apprentice for the Schools of Medicine and Pharmacy. In her own words, when she joined she was a quiet teenager with little confidence and short in self-belief.

But soon after she started working at Keele, something changed. Staff spotted Kate's ability to learn new tasks quickly and she developed a thirst for knowledge she didn't know existed. It wasn’t long before she asked to shorten her 18-month apprenticeship down to 12 months, such was her eagerness to start studying for a degree at the University the following year.

Now aged 22, Kate has today graduated from Keele with first class honours in Media and Marketing – and is set to begin her Master's in Social Anthropology at the University of Manchester in September.

Kate, who lives in Newcastle-under-Lyme, said: “I never even thought about going to university after college. Getting a job and earning money was what people like me, from an average, low-income household, were just expected to do. It didn't feel like it was an option to me because of the limits I put on myself.

“When I started working at Keele, just being on the campus every day and speaking to students started to open my eyes and made me realise I wanted to do what they were doing. The first year of my degree went okay but it was in the second and third year that I really started to discover myself, and university made me feel like I could use my voice for the first time in my life. I felt something for learning that I hadn't before and found a real love for knowledge and reading. Suddenly it was okay to have different opinions, and my self-confidence really started to grow."

While studying at Keele, Kate achieved consistent first-class results across all three years, and her first 90 per cent score on a second-year essay about gender norms and social media. She has made various contributions to the Keele community, including being a digital ambassador, and giving a careers day talk to Biochemistry students about alternative career paths in the face of inequality. In her final year, Kate has scooped two of the three annual media student prizes at the University for the best dissertation and best overall performance on the media programme.

Kate added: "I want to keep learning and expanding my mind. My ambition through studying Social Anthropology is to use my understanding of human socialisation in an academic or research career, supporting non-Governmental Organisations and Social Services.

"University has provided me with opportunities I never knew existed to expand both personally and professionally. It gave me the platform to have a voice that was listened to, and that allowed my confidence to grow. It changed my life and wouldn't have been possible if it wasn’t for the support I received from the staff at Keele throughout my time here, and my mum who pushed me to get the apprenticeship in the first place."