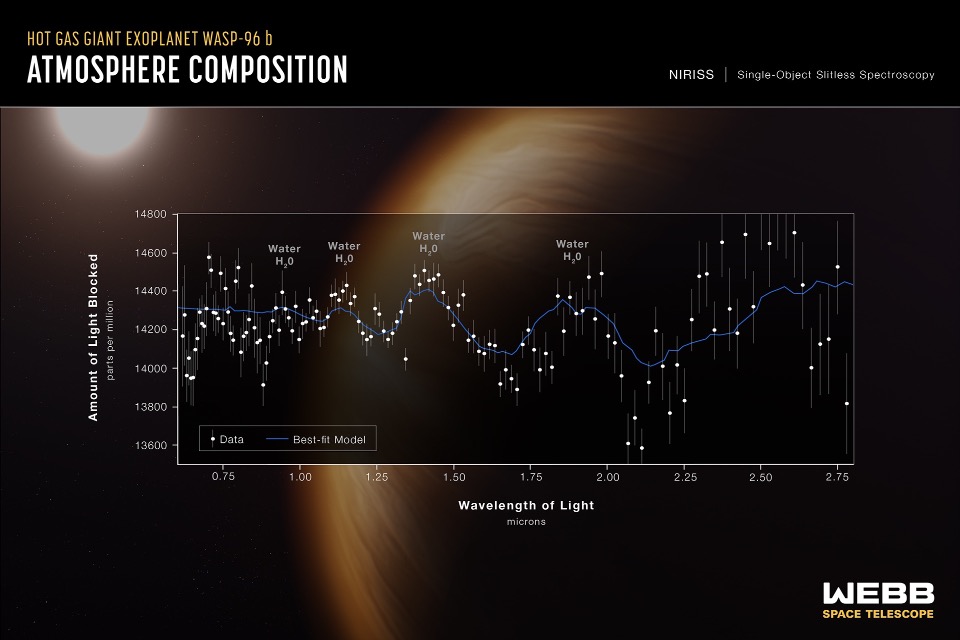 A spectrum of exoplanet WASP-96b was among the first much-anticipated Webb images released to the world today by NASA and its partners, the European Space Agency and the Canadian Space Agency.

The telescope, the largest and most powerful ever built, has captured the distinct signature of water, along with evidence for clouds and haze, in the atmosphere surrounding the planet, which is larger than Jupiter and composed mainly of hydrogen.

WASP-96b, discovered by the Keele-led WASP-South transit survey, was picked because it has the clearest skies of any known exoplanet. The WASP survey (Wide Angle Search for Planets) finds planets when they pass in front of their host star, blocking some of the light.

Professor Coel Hellier, who led the discovery of the planet in 2014, said: "I first noticed the host star back in 2011, and wondered whether the tiny dip in its light was caused by the passage of a planet. It is amazing that we can now study the planet in detail with the Webb telescope."

The observation, which reveals the presence of specific gas molecules based on tiny decreases in the brightness of precise colors of light, is the most detailed of its kind to date, demonstrating Webb’s unprecedented ability to analyse atmospheres hundreds of light-years away.

Webb's spectrum of WASP-96b shows that it is working perfectly. Webb will now be pointed at smaller, rocky, more Earth-like planets, to see if it can find some with Earth-like atmospheres. Since WASP-96b is very close to its star, completing an orbit in only 3.4 days, the water in its atmosphere is too hot to be in liquid form, but a rocky exoplanet further away from its star could be running with liquid water - and experts believe Webb might be able to find it.