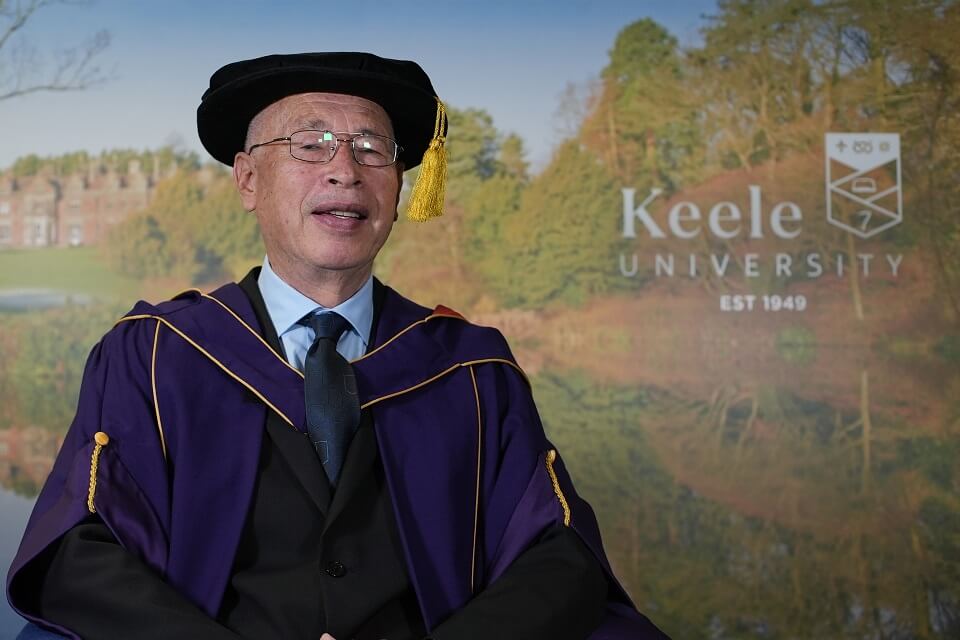 A philanthropist and environmental campaigner has said it was a “wonderful surprise” to receive an honorary doctorate from the University that his grandfather founded, and where he himself studied as an undergraduate.

Lord James Lindsay was made a Doctor of the University for his lifetime service and commitment to global peace and environmental issues.

James said his grandfather, Lord Alexander Dunlop (Sandy) Lindsay, who founded Keele University in 1949, would be proud to see how the University has grown since then, saying: “My grandfather was a socialist who believed in a broad education for everybody, not just an elite, so when I was able to take advantage of his vision and come to Keele, that was a wonderful opportunity for me.

“I think he would be very proud to see how Keele has thrived and grown and expanded. The student body is, for example, much, much larger than when I was an undergraduate in 1966, and Keele was voted by students as Britain’s best [in the Student Crowd Awards, 2022] - I think that would give my grandfather great pleasure in knowing that.”

Having studied at Keele in the 1960s himself, James added that he had personally benefitted from his grandfather’s vision of education being accessible for all, and that his Keele degree in Physics and Mathematics – with minors in Philosophy and Politics - had prepared him well for a varied and rewarding career.

Much of James’ working life was spent in the Australian Foreign Service, which saw him posted all over the world including Chile, Laos, Bangladesh, Venezuela, and Kenya.

After retiring from the AFS, James worked with the East African based organisation Horn Relief and Development. In 2005 with a Somali colleague, he founded Sun Fire Cooking to promote solar cookers to replace charcoal in Somalia.

James added: "I always thought I wanted to be a scientist, but I always had an interest in foreign countries and foreign societies, so when a chance came to join the Australian Foreign Service I did so, and I think my broad education at Keele enabled me to make the jump quite easily. It’s unusual in the Foreign Service for people from predominantly science backgrounds to join, but Keele prepared me to make that switch.”

He also encouraged this week’s graduates to get involved in political and environmental activism, and to take an active role in pushing for positive change, adding: “The world is changing rapidly, and the younger generation – the graduating class of 2022 - needs to keep pushing forward.”