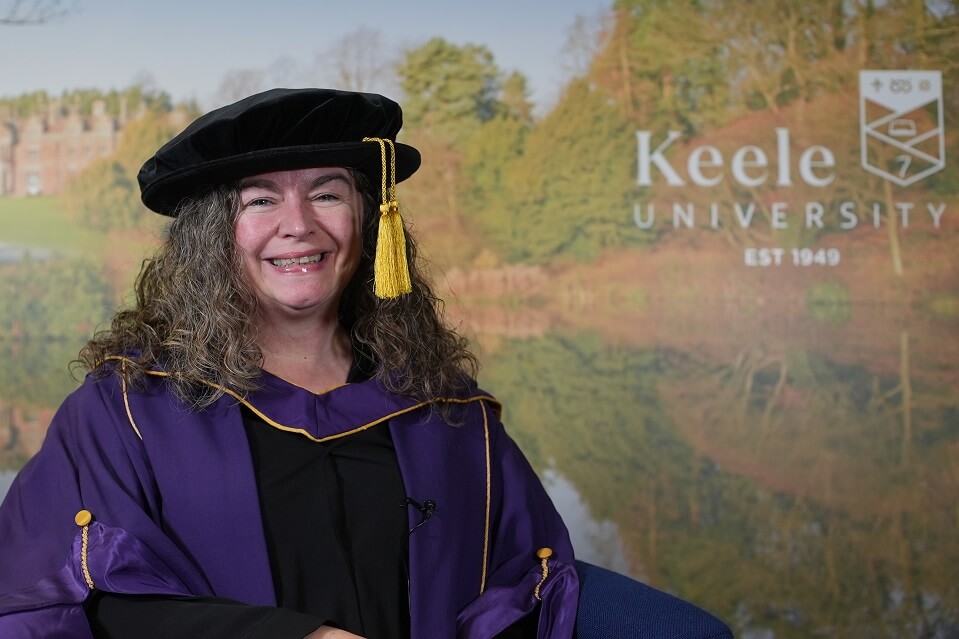 An award-winning playwright has hailed the 'special' relationship between the New Vic Theatre and Keele University – and the positive impact it has on the health and wellbeing of the local community.

Theresa Heskins, who has been the Artistic Director at the New Vic Theatre since 2007, received an honorary Doctor of Letters degree from Keele University in recognition of her services to the theatre and her cultural contribution to North Staffordshire. In a career which has earned several awards and accolades, her plays have been performed all over the world including Edinburgh, Cardiff, London, Newcastle, Canada, and Malaysia.

Keele has worked in partnership with the New Vic for a number of years on a wide range of projects and initiatives, from encouraging adults of all ages to enjoy drama and creative work, to drawing on knowledge from the University's academic experts to help bring stories to life in new plays.

Theresa said: "We’ve worked with Keele on amazing projects that have touched lives locally, nationally and internationally. It's worked so well because we’re all subscribed to the idea of making a difference, and having two really significant local organisations working together to make things happen is really a fantastic thing. I think this award is as much for the theatre and the work we have done together with the University, as it is for me."

The latest collaboration between the two organisations came earlier this year, when findings from Keele research into the real life "Great Escape" helped bring the story of the Stalag Luft III prisoner of war camp to life, in the play Tom, Dick and Harry. After impressing audiences in North Staffordshire, the critically-acclaimed production is now on stage at London's Alexandra Palace.

Theresa said: "The support from Keele has been amazing and we always know there is an expert here if we need to come and talk about something. Very recently while working on Tom, Dick and Harry we heard there was a scientist at Keele who had actually done a dig at the camp, so we got in touch and he came down to talk to the cast about what he had found and the processes involved. He even gave us a little bag of sand from the site which we treasured and used to colour match with the sand we had in the production. It was amazing to have his expertise on our doorstep.

"If I could give one piece of advice to the graduating students, it would be to go out there and make a difference. Spend 30 minutes every day making a difference to somebody else’s life."