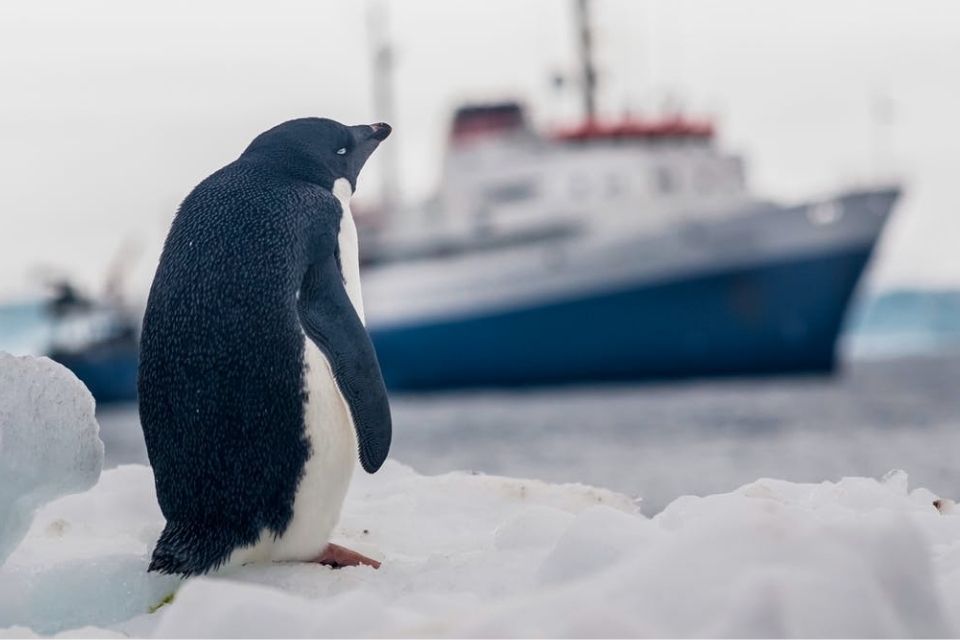 Every summer, as the sea ice surrounding Antarctica retreats, tens of thousands of tourists and scientists flock to the landmass by boat and plane. The remote continent is becoming increasingly accessible – during the 2019-20 season, the number of sightseeing visitors reached 74,000, with the vast majority travelling by ship. Scientific activities on the continent are also significant, with more than 70 research stations collectively housing thousands of researchers.

This activity, which is projected to increase in future, leaves a physical footprint with lasting consequences. In seeking to study or marvel at one of the last (nearly) undisturbed places on earth, humans are having a growing impact that can be measured and quantified.

Under the Antarctic Treaty, tourist and scientific operators are required to remove waste from the continent. Trash and human waste are flown or shipped off the continent for disposal at warmer latitudes. But some forms of waste are not so easily squirrelled off the continent. All activity in Antarctica – be it powered drills for scientific ice coring or vehicles for transport – burns fuel. As we burn fuel to keep warm, or to move around, our activities release microscopic particles of “black carbon” (smoke and soot).

Elsewhere in the world, black carbon is released in enormous quantities by forest fires and human activity. It travels great distances – the soot from the Australian bushfires in 2019-20 travelled around the world. Yet in Antarctica, which is isolated from the rest of the world by a strong “barrier” of circumpolar winds, the sources of black carbon are typically more local.

New research in the journal Nature Communications has extensively quantified the levels of black carbon in the snow near human settlements. Scientists first collected samples from 28 locations across a 2,000km stretch of the most-travelled section of Antarctica, stretching from the Antarctic Peninsula to the interior of the West Antarctic ice sheet.

By analysing the quantity and type of light-absorbing particles in snow samples, the researchers document how soot emitted by humans is affecting the properties of Antarctic snow near high-traffic areas.

Samples were passed through filters and analysed for their optical properties to identify the quantity and type of particulates. Many types of impurities that absorb light exist in Antarctic snow, though in minuscule quantities – the background level of black carbon in Antarctic snow is around 1 nanogram (one billionth of a gram) per gram of snow.

To differentiate between dust and black carbon, the researchers used the “angstrom exponent”. Put simply, smaller particles will absorb a greater band of light than larger ones – so the type of particles in the snow samples could be inferred from how the filtered particles interacted with light in the laboratory.

All samples from near human settlements showed black carbon levels greatly above the typical Antarctic background levels, a clear sign of human emissions. Elevated levels of black carbon will influence how snow absorbs light, a property known as “albedo”. Snow with a lower albedo will melt faster. As a result, the black carbon content in the collected snow samples could be used to infer whether snow melt rates might have increased due to human activity.

Scientists emit even more per capita than tourists

The results are sobering. In affected areas near human settlements on the Antarctic Peninsula, human-produced black carbon may be causing surface snow to melt by up to 23mm every summer. When examining tourist activities specifically, the authors calculate that each visitor between 2016 and 2020 was effectively melting around 83 tonnes of snow, due largely to emissions from cruise ships.

Scientific activities are not exempt – in fact, scientific research stations contribute to an order of magnitude higher per capita snow melt rate through the operation of fuel-intensive equipment and vehicles, sometimes year-round.

This research confirms similar studies elsewhere around the role of black carbon emissions in accelerating ice and snow melt. For instance, fires in the Amazon rainforest were found to have increased the melting rate of glaciers in the Andes. In Antarctica, the documentation of black carbon near settlements echoes other research on microscopic pollution, such as microplastics being found in sea ice and penguins. These findings show that human impacts may be more pervasive and insidious than they appear from a distance.

As human activity in Antarctica increases, so will the accompanying effects. Research on these real and potential harms provides vital information on how they might be best mitigated or avoided altogether. To minimise harm to wildlife and the environment, we need to ensure both research and tourism are carefully managed.