Mother and daughter graduate together from Keele University 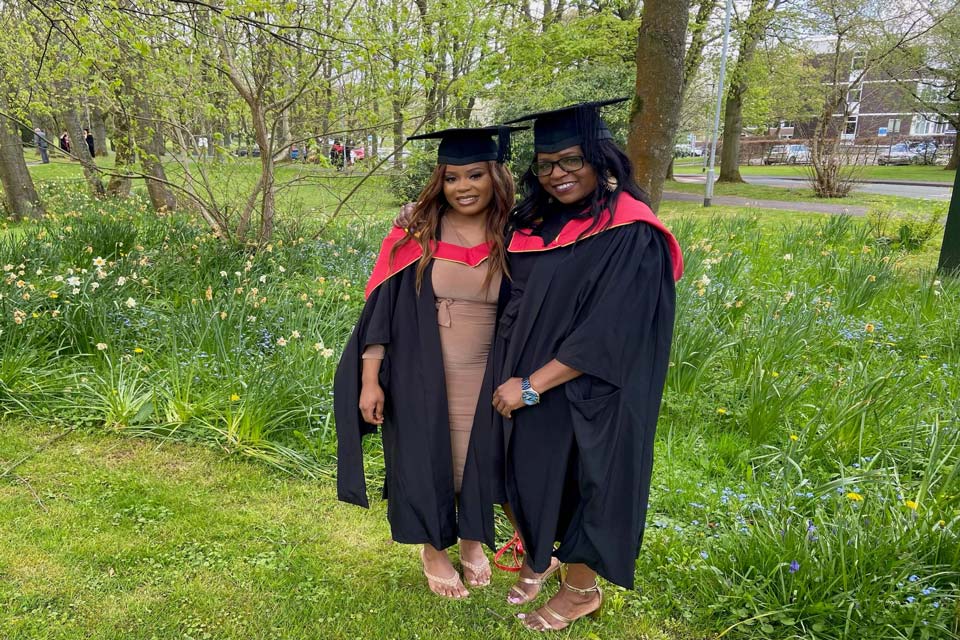 A mother and daughter are celebrating graduating together from Keele University – after studying exactly the same nursing degree.

Nyembezi Muzira, 49, and her daughter Mitchelle Bangajena, 25, proudly donned their caps and gowns after completing their Master’s degrees in adult nursing.

The pair, from Manchester, shared the same lecturers and would even sometimes travel to campus together in the same car. Mum Nyembezi started at Keele in 2018, with daughter Mitchelle following in her footsteps and starting on the same course a year later.

Mitchelle said: “Because my mum was already studying at the university, she had told pretty much everybody I was joining the following year, so I was constantly being asked by staff and other students if I was Nyembezi’s daughter. People were quite surprised we were at the same university and doing the same course but they also thought it was great at the same time.”

Before joining Keele, Mitchelle had graduated from the University of Liverpool with a degree in criminology and sociology, while mum Nyembezi studied health and social care at the University of Chester. But while you might expect the unique circumstances to make the duo the perfect study buddies, that wasn’t always necessarily the case.

Mitchelle said: “I still wasn’t quite sure what I wanted to do after my degree. My mum had started at Keele and at first I wasn’t interested in doing what she was, but the more she told me about the course, it sounded really good and I ended up changing my mind. She said it was a difficult and challenging course but that if she could do it, then so could I.

“Even though we were studying the same course, I don’t think we spent a single day in the library together! Because we were in separate years my mum finished before I did and there were a couple of times at home when I asked her a question about something on the course, but she would say she’d finished her studying now and would tell me to work harder.”

Their hard work has paid off, with the duo now working full-time in healthcare after passing their two-year courses. Mitchelle works as an A&E nurse at Stepping Hill Hospital, in Stockport, while Nyembezi works as a nurse in the private sector.

The pair are among thousands of students celebrating their graduation this week, as the university holds its biggest-ever graduation week and first in-person graduation ceremonies since before the pandemic. They plan to celebrate with a family barbecue at home over the Bank Holiday weekend.

Nyembezi said: “We do a lot of things the same and we do dress quite similar sometimes. Our graduation ceremonies were postponed due to coronavirus but it actually worked out really nicely for us and meant we could graduate at the same time, on the same day. It was a very proud moment graduating alongside my daughter and something I will never forget.”