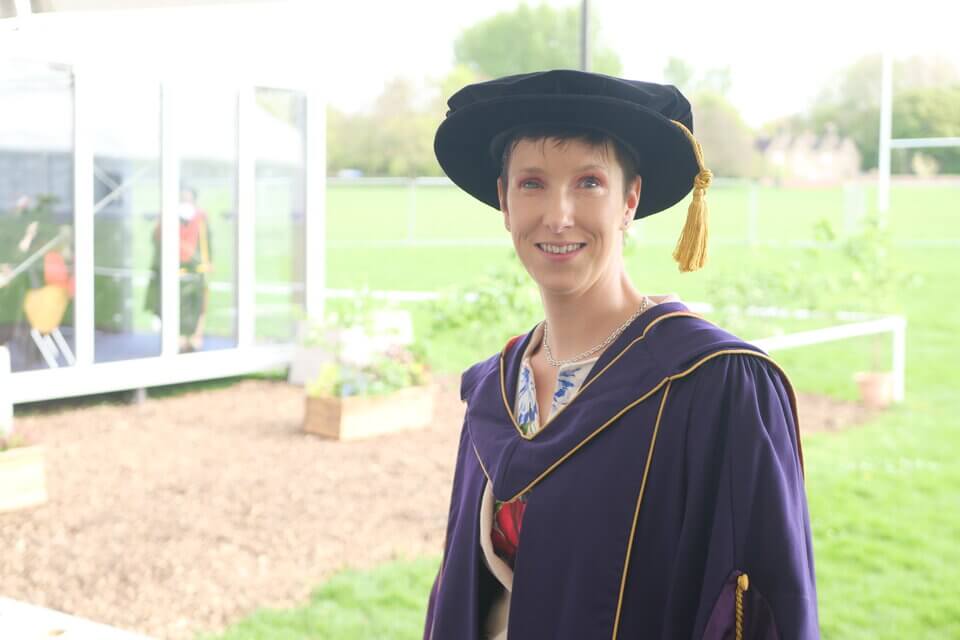 One of the Crown Prosecution Service’s (CPS) leading lawyers has spoken of her pride at receiving an honorary doctorate from Keele – 17 years after she graduated from the University’s School of Law.

Reflecting on her time at the university, Eran Cutliffe OBE credited Keele for giving her the “space to grow and learn” and helping her to discover who she was as a person. The specialist prosecutor, who is registered as blind, was back on campus to collect her honorary Doctor of Laws degree at this year’s graduation ceremonies.

And in a message to graduating students, Eran said: "The most important thing for any graduate is to have credibility and integrity. If you don’t have those qualities then you have lost your argument before you’ve started, so stick by them no matter what. This is the start of your next chapter now and it’s just as exciting as your time at university. Receiving this award from Keele is one of the more humbling experiences of my career. It feels very special to be recognised for the work I am doing by the university where I started my journey years ago."

After graduating from Keele in 2005, Eran began her career with the CPS in 2006 as a trainee solicitor and has since appeared in The Prosecutors, a three-part BBC series documenting the work of the CPS. In her current role, she advises on and prosecutes a range of high profile and complex cases including those involving ‘disasters’, corporate manslaughter, gross negligence manslaughter, serious police corruption, election offences and assisted suicide.

Talking about her job, Eran said: "Each crime is not just a case, it’s about people and families who have been affected often by really horrific sets of circumstances. In terms of my career, I would say I am most proud of helping people understand the process involved and achieving some sort of closure, because there is never truly going to be a sense of conclusion for someone who has undergone something horrific."

During the early days of her career in Staffordshire, Eran worked with Dr Jane Krishnadas to develop a community legal project today known as CLOCK (Community Legal Outreach Collaboration Keele), and remains involved with the group to this day. The project brings together a range of services to educate, assist, monitor and promote access to justice for disadvantaged communities.

Eran said: "The whole concept of CLOCK is just incredible and I’m very proud to be associated with it. The fact it has continued throughout the pandemic is testament to the people involved with it and other universities are now taking it on because of the trailblazing work done here at Keele."