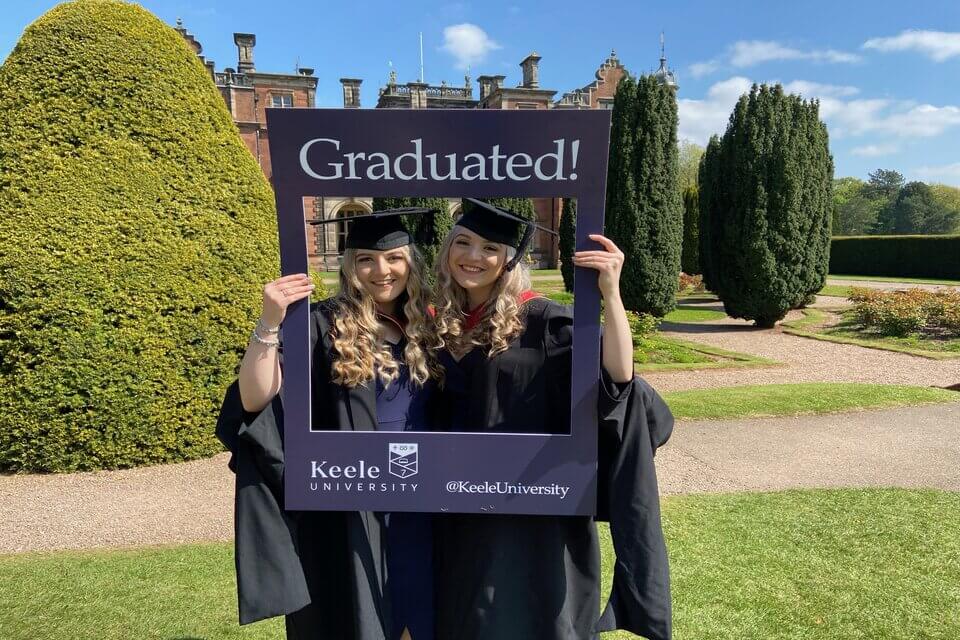 A pair of identical twins have graduated from Keele University on the same day with the same degree – and now they’re both fulfilling their lifelong dreams of being teachers.

Megan and Chloe Lake, from Stoke-on-Trent, have done the double after achieving first-class honours in geography at Keele University - and the similarities don’t stop there. After finishing their degrees in 2020, the 23-year-olds decided to stay on at Keele to complete their PGCEs and are now teaching at schools in their hometown less than four miles apart.

Chloe said: “We’ve both wanted to be teachers since we were about four years old. Our teachers in primary school were amazing and our geography teachers at secondary school and college were fantastic and inspired our degree choice at Keele. A primary school teacher once told us to ‘reach for the stars’, and those words have always stuck with us.”

The twins are used to doing most things in life the same, and even studied identical GCSEs and A-Levels in History, Drama and Geography. They both have season tickets at Port Vale and used to be ballgirls at Vale Park on matchdays. But when it came to their PGCEs, they broke the habit of a lifetime and went down different paths.

Megan said: “We’ve always studied and revised together for exams and we help each other out with everything, so it was the first time we have done something that different really. I wanted to work with younger children and Chloe loves geography and wanted to continue being involved with the subject, so my PGCE was in primary education and Chloe’s was in secondary. It was a bit strange doing different types of PGCE because we’d done the same degree, A-Levels and even the same GCSEs, but we both absolutely love our jobs. They are such rewarding roles and we couldn’t be happier.”

On the day the twins were due to submit their final year dissertations for their geography degrees, the country went into its first lockdown in response to the coronavirus pandemic. But after years of disruption, Megan and Chloe are now among thousands of students celebrating their graduations this week, as the University holds its biggest-ever graduation week and first in-person graduation ceremonies since before the pandemic.

Megan said: “We couldn’t wait to officially graduate. Although we’ve finished our courses and are working full-time now, we both said university isn’t completed until we can throw our caps in the air. It was really nice being back on the Keele campus and seeing everyone again and hearing what everybody had been up to. All of our family were with us on the day and then we’re going out with our friends at the weekend, so it’s felt really nice and special.”

Chloe said: “We absolutely loved our time at Keele and would both go back there in a heartbeat. The campus is beautiful and it’s just such an amazing environment to study in. We got to go to Singapore as part of our degree on a field trip which was an amazing experience that neither of us will forget. We can’t thank the staff and lecturers enough for all their support.”