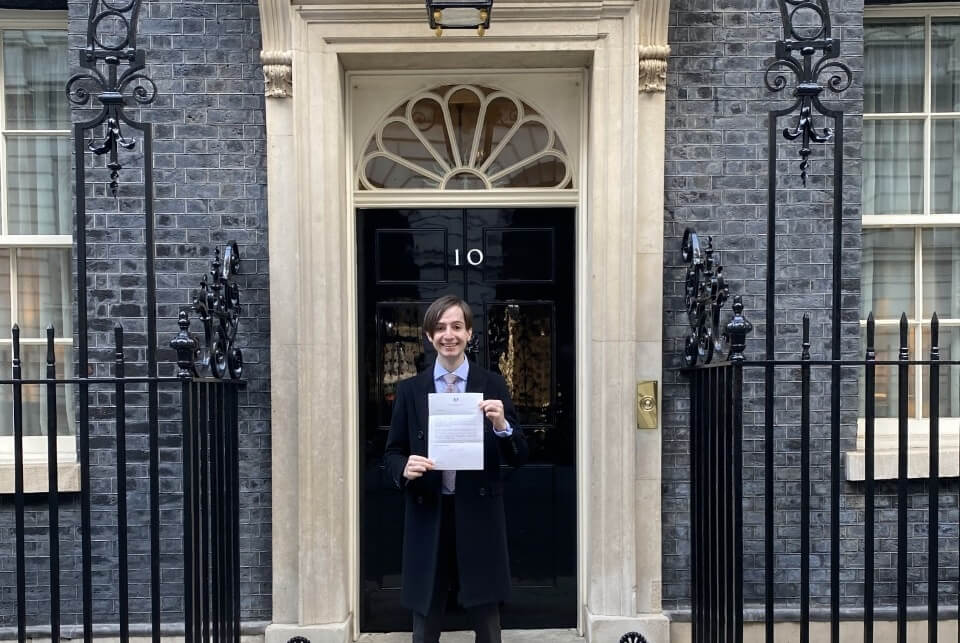 A Keele student was invited to 10 Downing Street this week to mark his success in making the finals of a prestigious international competition.

PhD student Elliott Lancaster, who has been announced as a Top 10 finalist in the Chegg.org Global Student Prize, has also been praised for his accomplishments by Boris Johnson, who wrote to Elliott to congratulate him on his “incredible achievement”.

During the visit, Elliot met with ministers to discuss the work which led to his shortlisting.

Elliott has made the Top 10 of the prestigious competition for his work campaigning for mental health, social enterprise, sustainability, and a solution to homelessness alongside his PhD studies. He has seen off competition from over 3,500 other competitors and is now in the running for a $100,000 prize.

In his letter to Elliott, the Prime Minister wrote: “You have shown great courage in overcoming personal challenges, and I know that your success will serve as an inspiration to young people across our country.

“Your passion for protecting our environment – including through your fantastic Utter Rubbish project – is inspiring, and exactly what we need at this crucial time in our planet’s history. I wish you all the best for the final on 10 November – and I hope that it will provide an even bigger platform for you to inspire others.”

Elliott said: “It is very humbling to have been recognised in this way alongside such inspirational students. I look forward to using this platform to amplify the student voice further.”

The winner will be announced at a virtual ceremony from the UNESCO headquarters in Paris on 10 November.