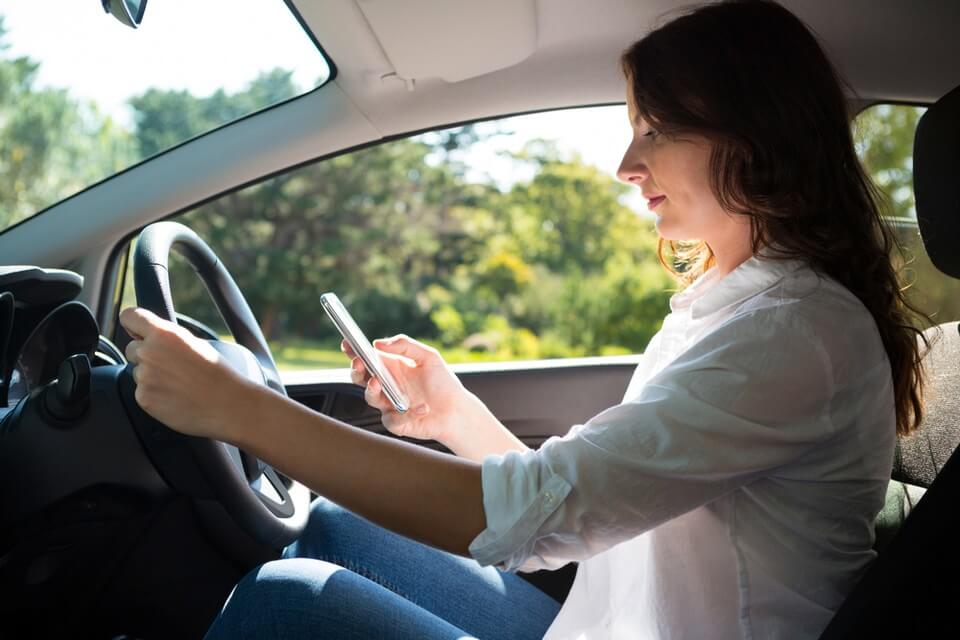 The laws around mobile phone use while driving are to be tightened under new UK government plans to make any use of a hand-held phone illegal. From 2022, mobile phone law will be extended to cover taking photos or videos, scrolling through playlists or playing games while driving or stationary, say, at a traffic light. Use of a mobile phone ‘hands-free’, however, will still be allowed – even though research shows it is equally distracting.

Currently, UK drivers using a hand-held mobile phone can only be prosecuted if it can be proven that they were using it for an “interactive communicative function” such as calling or texting. The change in the law closes this loophole, and makes it easier for distracted drivers to be prosecuted, fined £200, and given six points on their licence.

According to the UK government, 81% of people who responded to its consultation supported the move. This aligns with findings from roadside breakdown group RAC, whose annual report on motoring regularly shows that mobile phone use by other drivers is a top concern for motorists.

But data also shows that many drivers who claim to support the law nevertheless continue to use their phones while behind the wheel. One survey found that more than a quarter of drivers admitted to hand-held mobile phone use, at least occasionally.

So why do drivers who support the law, and acknowledge the dangers of distracted driving, still use their phones? The answer partly lies in driver attitudes and biases.

What the evidence tells us

Research consistently shows that most drivers consider themselves to be above average at driving. Statistically speaking, of course, this is highly unlikely. But this “self-enhancement bias” gives drivers a rationale for believing their mobile phone use is safe, while condemning others for doing the same thing.

Phone-using drivers justify their behaviour by claiming they are able to modify their mobile phone use dependent on the driving situation, such as limiting use on busy roads. They believe they are able to multitask and mitigate the risk in a way that other drivers cannot.

Drivers with self-enhancement bias also often demonstrate “crash risk optimism” – judging themselves to be at lower risk of a crash compared to other drivers.

In a sense, every journey a self-perceived above-average driver successfully completes while using a mobile phone appears to confirm to them that their behaviour is appropriate, and the law is aimed at other drivers. This helps to explain why strong support for a tightened law in this area can coexist with high rates of offending.

Education campaigns that, for example, feature fatal or serious collisions caused by a distracted driver can actually play into these biases. Such campaigns appear to confirm drivers’ belief that they can handle it, while these other “inferior” drivers could not.

For these over-confident drivers, perhaps the only deterrent would be the threat of enforcement. But in recent years, numbers of dedicated roads-policing officers in the UK have declined, and the public has, apparently, noticed. In one survey, 54% of respondents felt they were unlikely to be caught or punished for using a hand-held mobile phone while driving.

This combination of circumstances makes it very difficult to persuade drivers that they shouldn’t use their mobile phones behind the wheel. If a driver thinks they can safely multitask while also avoiding prosecution, what’s stopping them?

We need to change attitudes

The tightening of the law may help to encourage some drivers to think about their phone use, but it seems unlikely it will solve the problem of mobile phone use among drivers, and eliminate the harm it causes.

In a broader sense, changes to the law will never be able to keep pace with new technologies. In-vehicle distractions, such as interactive screens on the dashboard and digital assistants like Alexa, are developing more quickly than the law can keep up with.

If we want to reduce the number of people killed and seriously injured each year by drivers using their mobile phones, we have to persuade drivers not to do it regardless of whether or not they’ll get caught.

We need to challenge the narratives that drivers regularly deploy to justify their behaviour, and address driver biases head-on by providing education, based on psychological evidence, that’s harder for drivers to resist or deny. Interactive education, which allows drivers to experience their own distraction, rather than hearing about the failures of others, would be a good place to start.