How Keele prepared Sajan Khullar for a career in medicine 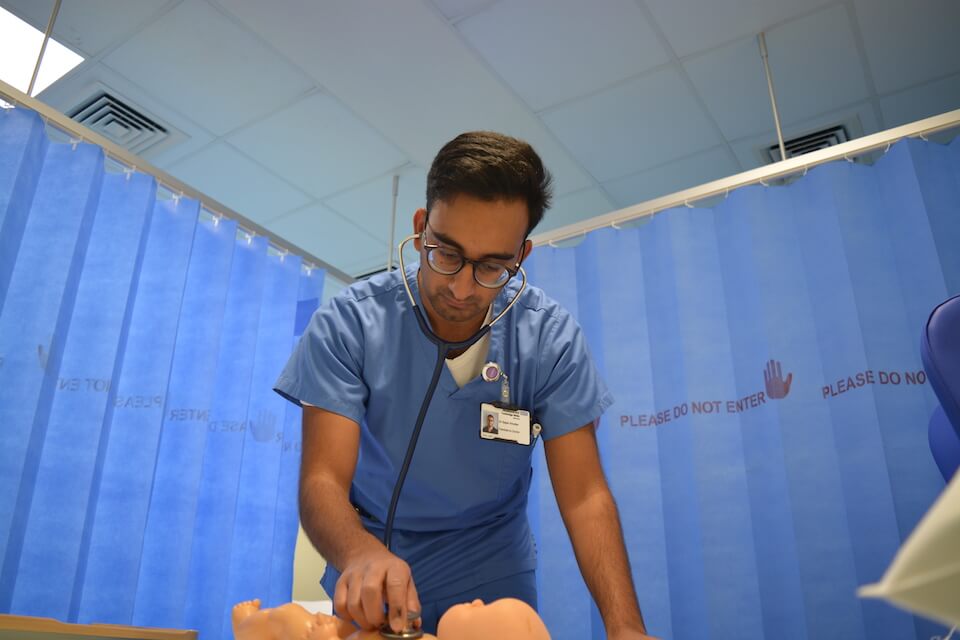 Since graduating with a degree in Medicine from Keele in 2018, Sajan Khullar is pursuing a career in paediatric medicine at the Maidstone and Tunbridge Wells NHS Trust.

After leaving Keele, I stayed local, enticed by great experiences as a student, and started my job at Shrewsbury and Telford Hospital NHS Trust, where I worked across a range of specialties including emergency medicine, general surgery and general medicine. In December 2019, I moved to a post in neonatal medicine, which confirmed to me that I would like to further pursue a career in paediatrics, which I have now started training for. Next, I took a year out of training to undertake a Postgraduate Certificate of Education in Clinical Medicine, supported by Keele University as I worked as a clinical teaching fellow, where I taught senior medical students who are placed at Shrewsbury and Telford Hospitals.

I am currently starting my speciality training in paediatrics at Maidstone and Tunbridge Wells NHS Trust, working in both neonatal medicine and general paediatrics providing a wide scope of care for children of all ages. Using skills from my clinical teaching fellow year, I have also gained the opportunity to continue delivering simulation teaching for medical students, which is something I love - it is a real pleasure to teach future doctors and think about them as my future colleagues instead of my students. I love seeing them succeed.

Working as a junior doctor during Covid-19 has been challenging to say the least, as it has been for so many others too. During the first lockdown, we had to adapt to new ways of working including longer shifts and working three days on and three days off, which were very important to help recover from the days on the ward. Wearing masks all of the time has been difficult too in the sense that it has meant that communicating with patients has been hard as so much of our job involves being able to read how people are feeling through their body language.

The School of Medicine’s aim is to graduate excellent clinicians and they are so focused on developing such hands-on doctors, so when I started the job, I really did feel prepared. I felt like it provided me with a great foundation that meant that I could continue to apply myself and build upon the invaluable skills that Keele provided me with.

Keele really nurtures you to be the best that you can be, and the best thing about Keele is that there are so many things available for you to pick from, whether it be sport to hobbies to societies to modules, Keele has it all and I am so thankful for this.

I chose to study at Keele because when I applied, the School of Medicine was relatively new and I liked that the year group was small. I just knew that being in a smaller place was for me and it meant that everyone, from the teachers to colleagues, provided so much support and they all know you by name, and you are not just a number. I could be a big fish in a small pond, a place where my voice was heard.

While I was at Keele, I really tried to make the most of all the opportunities I could. In my first few years I was involved in the Keele Medical Charity Society where we raised money for a variety of local charities. I also took part in lots of sports including ultimate frisbee and touch rugby and even performed at the O2 Arena for the “Battle of Bollywood” as part of the Bollywood society. I also got involved in student council and was a resident support assistant, helping students who live in University halls of residence. I have made so many life-long friends at Keele from living in halls, studying on my course and through being involved in so many societies.