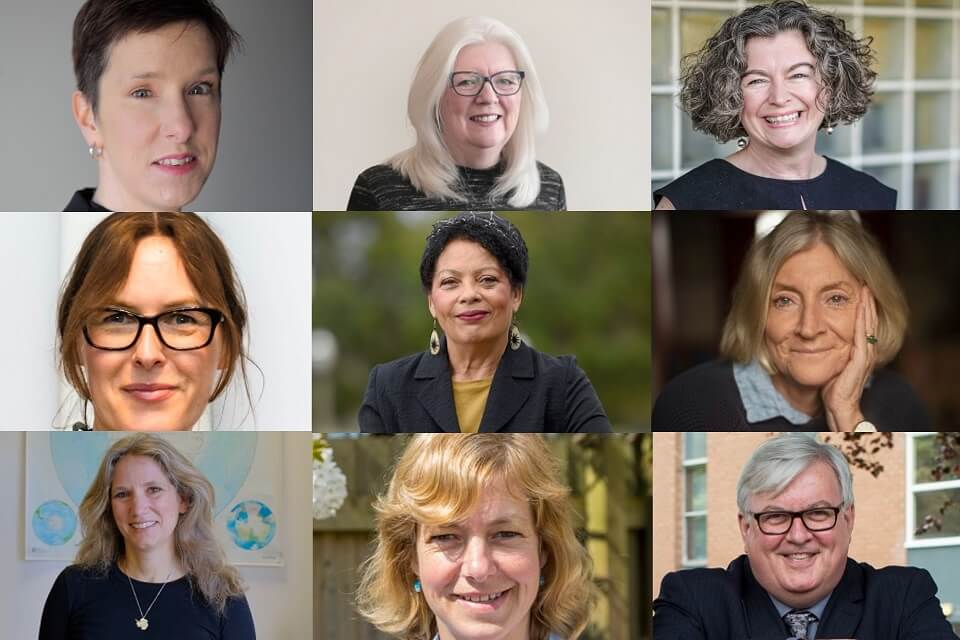 Distinguished individuals from the fields of law, sustainability and media are among those to receive honorary degrees from Keele University.

The nine honorary graduates have been chosen to mark their outstanding contributions to society in fields such as environmental campaigning, journalism, the arts, and medical and mental health research.

The list includes those who were due to receive their honorary degrees at the 2020/2021 graduation ceremonies which were postponed due to the Covid-19 pandemic.

Among those to receive honorary degrees are local businesswoman and philanthropist Carol Shanahan; the Chief Executive of Midlands Partnership NHS Foundation Trust, Neil Carr; and Eran Cutliffe, a Keele alumna who now works as a Specialist Prosecutor in the Crown Prosecution Service.

Professor Trevor McMillan, Vice-Chancellor of Keele University said: "Our honorary graduates have all achieved remarkable things in their respective fields of expertise, and I am thrilled to welcome them to the Keele community with the presentation of these honorary degrees.

“Their outstanding contributions are many and varied, including achievements in fields such as medical research, promoting social equality and tackling social exclusion in our local area, and I will be proud to stand alongside them to celebrate these achievements when circumstances allow.”

Carol Shanahan - Doctor of the University

Carol Shanahan is a local businesswoman, philanthropist, and the Chair and co-owner of Port Vale FC. She is the Chair of local data science firm Synectics Solutions, and in 2018 she set up the Hubb Foundation, to provide fun and engaging activities for youngsters and nutritious meals in a safe environment during school holidays, building on her previous work to tackle food poverty among local schoolchildren. She was also awarded an OBE in 2020 for her services to the communities of Stoke-on-Trent. In 2020 Carol oversaw the creation of the Port Vale Community Hub which has delivered more than 170,000 meals to families in need across Stoke-on-Trent.

Eran Cutliffe qualified from Keele University’s School of Law in 2008. During the early days of her career in Staffordshire, she worked with Dr Jane Krishnadas to develop a community legal project today known as CLOCK (Community Legal Outreach Collaboration Keele), and remains involved with the group to this day. In her current role as a Specialist Prosecutor in the Crown Prosecution Service, she advises on and prosecutes a range of high profile and complex cases including those involving ‘disasters’, corporate manslaughter, gross negligence manslaughter, serious police corruption, election offences and assisted suicide. Her work was featured in the acclaimed BBC documentary ‘The Prosecutors’ and in 2019, she was awarded an OBE in the New Year’s Honours List for services to law and order.

Theresa Heskins is an award-winning playwright and theatre-maker, and has been the Artistic Director of the New Vic theatre in Newcastle-under-Lyme since 2007. Last year her production of The Worst Witch, originally created for Northampton Theatres, won an Olivier Award. Her production of Around the World in 80 Days, originally created for the New Vic then for Manchester’s Royal Exchange, visited New York after a UK tour. It was the New York Times’ Critic’s Pick and won the London Book Week Cameo Award for best stage play adapted from a novel. The Snow Queen, which she wrote and directed for the New Vic, won UK Theatre’s Best Show for Children and Young People award. Her plays have been revived all over the world including Edinburgh, Cardiff, London, Newcastle, Canada, and Malaysia.

Professor Williams is the former Head of the School of Public Policy at Keele University, a position she held for six years. She is currently an Honorary Professor at Bangor University, and holds Honorary appointments at Glyndwr University and at the University of South Wales. She was awarded a personal chair at Keele University in 2007, the same year she was awarded an OBE in the Queen’s New Year’s Honours List for services to ethnic minorities and equalities in Wales. She has held numerous Ministerial public appointments on taskforces and working groups in the UK and specifically in Wales, and her research into equality in public appointments in Wales and access to justice in Wales resulted in the major equality bodies revising their policy and practice. Most recently she was appointed as Chair of the Ministerial Working Group 'Communities, Contributions and Cynefin: Black Asian Minority Ethnicities in the new curriculum' for 2020-2021, charged with embedding these perspectives in school policy and practice in Wales.

Neil Carr is the Chief Executive of Midlands Partnership NHS Foundation Trust, and is a mental health nurse by background and training. Neil has spent his career championing healthcare developments particularly in mental health and more recently the integration of physical, mental health and social care. He has worked in collaboration with colleagues from Yale University in leading nationally on non-medical prescribing and nurses being awarded prescriptive authority, which over the past 20 years has gone from strength to strength and supported the development of nurses and Allied Health Professionals into advance practice roles. He has also been instrumental in developing and establishing sub-specialties in the field of mental health care, including services for eating disorders, perinatal mental health and psychiatric intensive care.

Baroness Boycott is a crossbench peer in the House of Lords. She was appointed in 2018 after chairing the London food board since 2008. She has been a journalist all her life, cofounding Spare Rib in 1972, and going on to edit Esquire magazine, the Independent on Sunday, the Independent, and the Daily Express. She is currently the chair of Feeding Britain and Veg Power, a trustee of the Hay literary festival foundation, a trustee of the Food Foundation, a trustee of StreetSmart, and the President of the Guild of Agricultural Journalists. She is a founding member of peers for the planet, and has just been appointed to the environment committee in the House of Lords.

Dr Shuckburgh is Director of Cambridge Zero, the University of Cambridge's major climate change initiative. She is also Reader in Environmental Data Science at the Department of Computer Science and Technology and leads the UKRI Centre for Doctoral Training on the Application of AI to the study of Environmental Risks (AI4ER). She is a mathematician and climate scientist and worked for more than a decade at the British Antarctic Survey where she led a UK national research programme on the Southern Ocean and its role in climate (ORCHESTRA), and was deputy head of the Polar Oceans Team and head of the Data Science Group. Prior to that she undertook research at École Normale Supérieure in Paris and at the Massachusetts Institute for Technology (MIT). She has also acted as an advisor to the UK Government on behalf of the Natural Environment Research Council.

Dr Philpott is CEO of the IASME Consortium Ltd, a company which focuses on information assurance for small companies and the supply chain. IASME worked with the UK government to develop the Cyber Essentials scheme and was awarded the contract to be the sole NCSC Cyber Essentials Partner from April 2020. IASME also deliver the IASME Governance certification scheme, and have just launched a security certification scheme for Internet of Things devices and Counter Fraud controls. IASME and their network of more than 260 Certification Bodies certify almost 2,000 companies per month. She is also the Founder and Manager of the UK Cyber Security Forum, a not-for-profit organisation leading an initiative to train unemployed neuro-diverse adults in cyber security and supporting them to find employment.