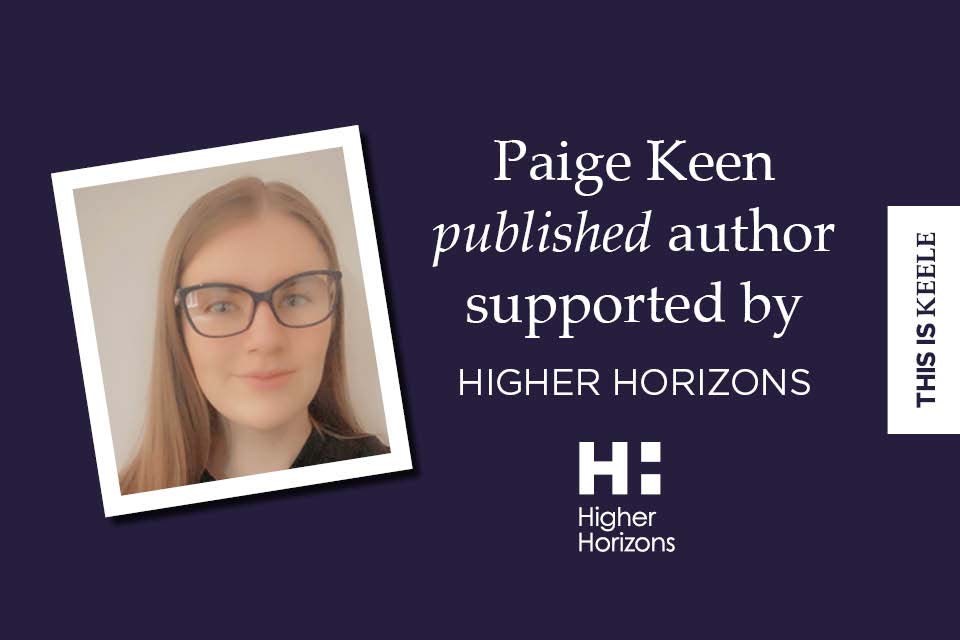 A young author has published her debut novel thanks to support from the government-funded Higher Horizons programme, which is led by Keele University.

Paige Keen, 15, a pupil at The Rudheath Senior Academy in Northwich, was inspired to write her novel - titled 1-in-4 – after first engaging with the White Water Writers programme run by Higher Horizons in 2019, which saw a group of ten year 9 students working collaboratively to write and publish a book in a single week.

She also wrote a short story for a follow-up programme run during the first lockdown in 2020, and decided she wanted to develop it further into a novel. To help her on her journey, Higher Horizons arranged for her to receive specialist writing software, which she used to complete the novel before self-publishing the book early in 2021.

The plot is centred around the theme of mental health, with all proceeds from sales of the novel being donated to a mental health charity.

Paige said: “I have always wanted to write my own novel, as I have always been a keen reader. Reading is my escape and it brought me so much comfort relating to novel characters. Therefore, I decided that writing my own was my way of giving back to society for the positivity that reading has brought me.

“Equally, I am highly passionate about mental health so writing a book about it meant that I could portray the key message: it’s okay to not be okay- especially with my own struggles with mental health. Writing my own novel was difficult at times and there were moments where I felt like giving up. But then I remembered how far I’ve come, reflected on the plot again and carried on writing. It has been a huge milestone in my life and I’m forever thankful for it.”

She now intends to study English Literature at college and plans to write a sequel to the novel, adding: “I wouldn’t have been able to write a book without Higher Horizons. The support I received was absolutely amazing and it ensured that everything was up to a high standard. Writing a novel has definitely increased my self-confidence, especially after the positive feedback from others after my book was published. It allowed me to express myself in a way that I never have before.”

Jemma Morrell, Assistant Head Teacher at The Rudheath Senior Academy said: “The encouragement that Paige has had through the White Water Writers programme and through school has meant that she has been given a real chance to challenge herself and succeed. The programme allowed her to really process her ideas and see how the structure of a novel could come together in a meaningful way- that, together with her exceptional creativity and hard work, has meant that she felt able to give it a go. I couldn’t be prouder of her.”

Higher Horizons based at Keele University is a government-funded outreach programme which organises and delivers outreach projects and activities designed to engage young people and school pupils across Staffordshire, Cheshire and Shropshire, to encourage them to attend university.

Richard Seymour, Higher Horizon project officer who oversaw the project added: “Anyone who works on White Water Writers dreams of inspiring a young person to go on to become an author in their own right. When I first worked with Paige, it was clear she was determined to make the most of the opportunity presented to her, and I am not at all surprised to see her achieve that. It’s important to say that every word is hers, every idea, plot twist and character. All we did at Higher Horizons was give her the chance, but it was Paige who took it.”