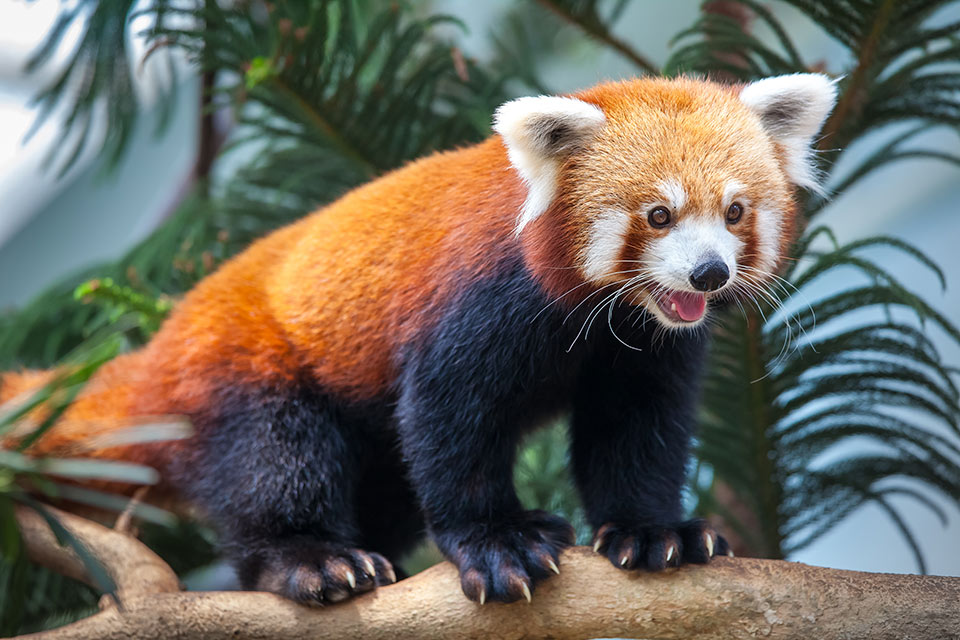 Red pandas are not bears but they do mainly eat bamboo, like their much larger namesake the black and white giant panda. Officially classified as endangered, red pandas live across a stretch of the Himalayas and are in fact part of the same family as weasels and raccoons. Now, advances in fancy gene sequencing have allowed scientists to analyse their full genetic make up for the first time – with big implications for conservation.

Previously, scientists recognised two different subspecies. Those pandas to the east of the Nujiang River (also known as the Salween River), with wider cheekbones and redder faces, were classified as the Chinese red panda. Those to the west were the Himalayan red panda.

But this division into has long been debated. The Nujiang River was perhaps a convenient and seemingly obvious geographical feature on which to place a boundary, but pandas on either side didn’t show a clear difference.

A new study published in the journal Science Advances by researchers from the Chinese Academy of Sciences places a firm marker in that debate. According to their work, the pandas do indeed fall into two clear genetic clusters, albeit with the likely boundary between the two actually being the Yalu Zangbu River, several hundred kilometres further west. The two clusters are distinct enough for the researchers to conclude they can be classified genetically as two distinct species.

Cleverly, the scientists also compared the DNA of female-inherited mitochondria (the “batteries” of cells) and the Y chromosome carried by males. This showed that, as in giant pandas, it is the females that disperse throughout their range, not the males. This is different from most mammals in which it is the males that travel around and spread genetic diversity among different populations. As in the giant panda this may be due to competition for dens between females and because of male territoriality.

What this means for red pandas

Does any of this matter? After all, such classifications may seem irrelevant and nerdy if we need molecular genetics just to distinguish between two otherwise matching fluffy pandas. But, yes, species (and subspecies) do matter.

First, it’s useful for raising awareness. You may have heard of Lonesome George in the Galapagos, the last surviving Pinta Island giant tortoise. He became famous (and attracted serious conservation attention and popular support) precisely because scientists recognised that giant tortoises were different species or subspecies on different islands.

Molecular genetics knowledge is also crucial to the survival prospects of red pandas. Knowing past patterns of gene flow and that females were largely responsible means conservationists can plan zoo breeding or translocations of individuals in the wild, in line with population genetics.

The researchers identify three distinct populations within the Chinese red panda and suggest they are treated as separate conservation units. For one of the populations, this would need international cooperation between China, Myanmar and India. Identifying this in the genetics of a cute “flagship species” like the red panda is a promising way to get politicians to work together across borders to protect entire ecosystems, with much wider conservation benefits.

There is limited information on red panda population status but overall assessment is of major declines. Distinguishing two species might allow different levels of vulnerability to be highlighted. Importantly, the Himalayan red panda has very low genetic diversity and carries a high level of potentially unhealthy mutations. In theory, this means scientists could carry out a genetic rescue by selectively breeding them with Chinese red pandas.

But this is where different concepts of species as separate entities become controversial. The use of genetics to define a species as a cluster sharing uniform genomes – the “phenotypic species” concept – is increasingly common but still contested. One option would be to instead default back to the “biological species” concept, which says animals that can interbreed are the same species and distinctions based on appearance or other characteristics form separate subspecies. On that basis, Himalayan and Chinese red pandas – which are able to breed with each other – are the same species.

This all raises lots of tricky questions: would we be right to genetically isolate the Himalayan red panda for purity, but risk poor genetic health and a greater risk of extinction? Or should we maximise its survival chances with selective aid of Chinese red panda DNA, even if that means conserving a less “pure” Himalayan “species”? Is maintaining a genetic divide between “species” more important than between “subspecies”?

Deciding the two are separate species may also have unforeseen consequences for conservation administration. Well-meaning frameworks for species protection may limit genetic rescue options for the Himalayan red panda or put paperwork barriers in place between wild populations. Given the blurred genetic boundaries and uncertain geographic separation, perhaps dividing animals into species based on genetics is indeed unhelpful.

We should finish with a word of warning. To most people, a “tiger” is a tiger, but scientists recognise various subtly different subspecies. That recognition has been central to realising the vulnerability of certain populations and targeting conservation efforts towards the critically endangered subspecies like Sumatran or Malayan tigers. Despite that, however, several subspecies have already gone extinct. Reclassifying a subspecies as a species may help conserve it, but it can’t reverse decades of hunting and habitat loss.

Read more: What is a species? The most important concept in all of biology is a complete mystery