The Office for Students (OfS), an independent regulator of higher education, has launched a new Uni Connect Programme at the Houses of Parliament to replace the government-funded National Collaborative Outreach Programme (NCOP).

Uni Connect will be delivered in Staffordshire, Shropshire and Cheshire by Higher Horizons, a partnership of local universities and colleges led by Keele University.

The programme aims to give young people impartial information, advice, and guidance about post-18 education, with the ultimate aim of making a university-level education accessible to all young people regardless of background.

The two-year, £5.6 million programme will see information sessions delivered in schools about university, apprenticeships and careers; campus visits and residential stays at universities throughout the country; curriculum-based workshops designed to boost subject learning; and support for the emotional wellbeing and resilience of young people who take part.

Higher Horizons has delivered collaborative outreach activities to local schools and colleges through various government funding streams since 2004. Following the launch of the current version of the programme in 2017, the first young people who have taken part for the last three years are now old enough to apply to university themselves. 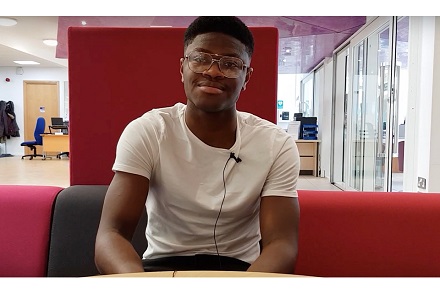 Joseph from Stoke-on-Trent is one young person who has benefitted from Higher Horizons activities since 2017. Joseph, who grew up in Italy in a Nigerian family, moved to England when he was 14. Through Higher Horizons, he took part in a week-long project called White Water Writers and wrote a book, visited Keele and Oxford Universities, and took part in the Potteries Science Festival activities at Staffordshire University. Joseph credits the programme with boosting his confidence and language skills, as well as exposing him to a variety of English universities. Joseph is currently in his final year at City of Stoke-on-Trent Sixth Form where he is predicted to get top grades in his A Levels and has recently applied to university.

When reflecting on his experiences, Joseph said: “I thought the idea of going to university was impossible, but with Higher Horizons and the experiences and visits through the years, I was able to gain confidence and improve my English, and now I’m at the position where I have applied to several Russell Group Universities.”

Since 2017 Higher Horizons has delivered over 1,500 activities across Staffordshire, Shropshire and Cheshire with over 30,000 young people.

Head of Higher Horizons Ant Sutcliffe said: “We are delighted to be able to continue creating opportunities and pathways for young people across our three counties. We believe that our young people are the most talented in the country, and we are committed to helping them on their journey.”