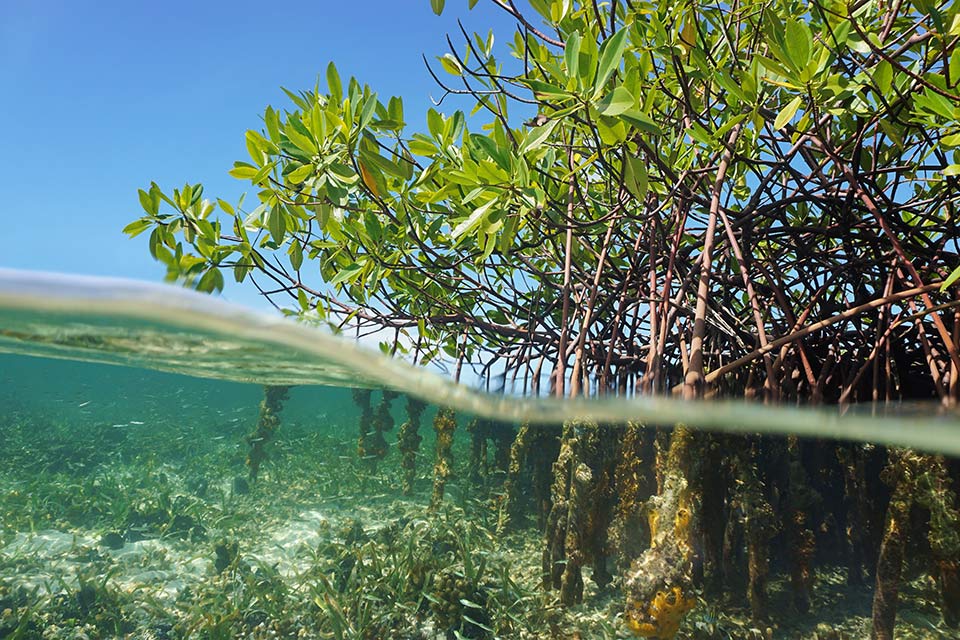 Mangroves are incredibly productive coastal ecosystems found in the tropics and subtropics. These dense green forests are known for their bizarre-looking roots that poke up into the air from shallow water. Among the meshed webs of roots are fish nurseries, enabling humans to make a living from the marine life in and around the mangroves.

Mangroves also play another important role for humans, protecting communities from major storms. Climate change is more than rising temperatures, and the increased frequency and intensity of cyclones, hurricanes and typhoons is apparent. Cyclone Fani for example, which recently struck the Bay of Bengal, was one of the strongest to devastate India in the past 20 years.

Mangrove roots can break up the force of a storm surge, soaking up some of its energy and protecting people living on coasts from cyclone damage. Yet it is a challenge to effectively value and protect individual mangrove ecosystems. And we just don’t have the people or funds to deliver detailed studies for even a fraction of the villages and towns sheltered by mangroves.

That is where we need a global rule of thumb that can be applied anywhere. It needs to be rigorously evidenced, and trusted enough for economic values to be used in planning calculations by governments and financial institutions. This is provided for coastal mangrove protection by an innovative new study in the prestigious Proceedings of the National Academy of Sciences.

Jacob Hochard and colleagues use global data covering nearly 2,000 coastal communities in 23 countries and 194 mangrove areas. Meticulous statistical analysis of cyclones from 2000 to 2012 provides a convincing model of how economic activity is impacted and recovers. It is well established that how brightly lit an area is at night correlates to its economic activity. Hochard’s innovation is to compare satellite imagery data of nighttime light levels with a timeline of cyclones. Economic losses are estimated from reduced nighttime light levels.

As differing levels of wealth make it tough to directly compare the economic impacts of mangroves in, say, Florida and Haiti, Hochard and colleagues instead express losses not in US dollar value but as relative to months of economic productivity.

Losses per cyclone for communities with 6m of mangroves per metre of coastline were double that of communities protected by 25m per m of mangroves. In the former group, losses are somewhere between 5.5 and 6.5 months of economic activity. In the latter, the extra mangroves kept cyclone impacts down to between 2.5 and 5.5 months.

Mangroves and the wider blue economy

Mangrove forests cover just 0.5% of the world’s coasts but account for an estimated 10-15% of coastal carbon capture. As we try to stop CO₂ levels rising and put the brakes on climate change, protecting mangroves for their blue carbon value is key.

Mangrove protection from cyclones also reduces longer term deterioration of low-lying inland areas with rising sea levels. Storm surges and flooding from cyclones, which deposit salts, are greater without mangrove protection. In Bangladesh, for example, rice agriculture is increasingly impossible as fields are flooded with seawater. One way communities are adapting is to shift production to shrimp farms. Booming shrimp aquaculture, however, ironically requires further mangrove clearance to create space – as seen graphically in Sri Lanka. Loss of mangrove protection from cyclones then worsens coastal deterioration.

Mangroves aren’t only lost to aquaculture, or harvested for wood, however. Mangroves are strongly affected, for example, by polluted freshwater flowing to the coast. Conflicting objectives at different levels of government and in different locations need joining up. And mangroves are just one aspect of coastal ecosystems and economies – effective management will mean integration with seagrass systems, coral reefs and so on.

The complexity is daunting. We need to be able to act using general principles that can be translated to the great majority of locations for which there are not the resources for local studies. Robustly evidenced global models such as this make that possible. The clock is ticking as mangroves are rapidly lost worldwide.