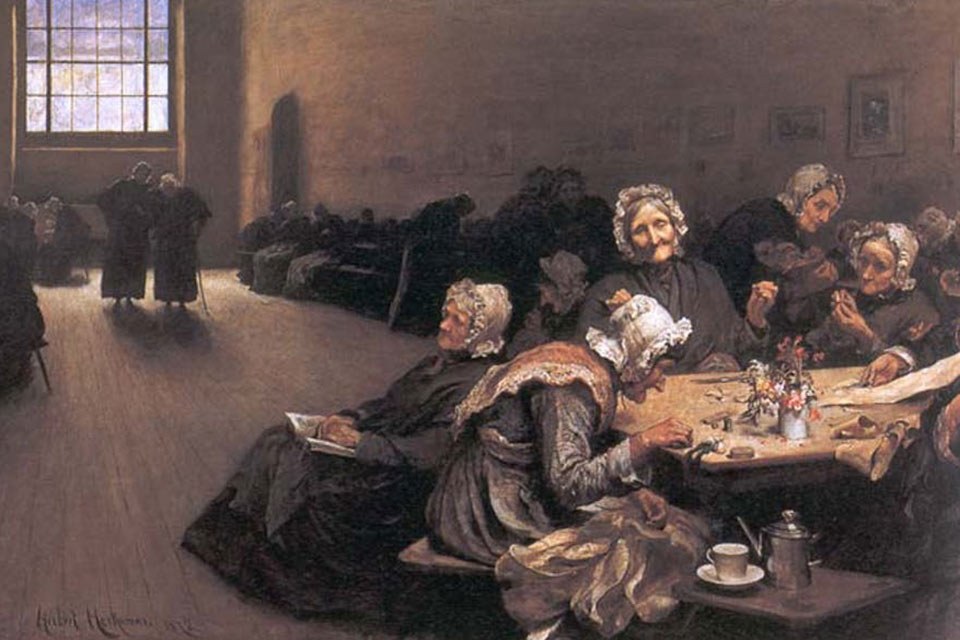 Eventide: A Scene in the Westminster Union from 1878. Hubert von Herkomer

The UK’s Universal Credit programme, which aims to roll six forms of state welfare including unemployment and housing benefits into one, was launched in 2010 with the aim of supporting people to work. So far it has resulted in real hardship for numerous claimants. In early January, the minister in charge of its rollout, Amber Rudd, announced reforms to its design, including piloting new ways to ease the payments system.

While the lessons of history are sometimes rather hard to discern, in this case there is a clear precedent that supports those calling for Universal Credit to be paused, or even scrapped: the Victorian workhouse.

The overall Universal Credit policy coheres quite closely to that of amendments to the poor law in 1834, which kickstarted a large programme to build workhouses. The two policies, nearly 200 years apart, were prompted by some of the same economic concerns.

At the time the 1834 law was passed, the high cost of the parish poor relief had been a focus of anxious public attention for some time. Parishes gave people some money to live on if they could not make ends meet, but this technically gave them a purchasing power they had not earned through work.

The rising costs of poor relief in the early 19th century, combined with post-war recession after 1815, inspired an increasingly austere attitude towards the poor. The fear among local taxpayers was that the list of poor-law beneficiaries was being artificially swollen by people who were physically capable of work, but who preferred to live on parish subsidies. This fear was based on rhetorical narrative rather than research, and talk among legislators was quickly translated actions driven by ideology.

Sent to the workhouse

The laws governing welfare before 1834 were notoriously flexible, and some parishes chose to experiment by imposing strict boundaries on the allocation of poor relief in the lead up to the statutory change.

The parish of Southwell in Nottinghamshire, for example, piloted a stringent suppression of claims for relief. The goal was to make welfare simpler, more affordable, and more likely to encourage the poor back into self-supporting work, by ending all forms of assistance outside of the workhouse. A workhouse built in 1824 was central to the scheme, and it still exists today, owned by the National Trust. Life in the workhouse was planned to deter the lazy from asking for help. The subtext of this sort of “support” to work was to chastise people into productivity.

When a special commission was formed in 1832 to consider the existing poor laws, the example offered by Southwell was a specific focus of attention. The commissioners sought advice from George Nicholls, a former official or overseer of the poor in Southwell. They made the abolition of relief outside of workhouses a central tenet of their recommendations, based on a desire to eradicate “idleness”, and to punish the people capable of work but not in work. The national legislation of 1834 was framed on the basis of the commission’s report, and Nicholls was appointed as one of the three men charged with implementing the new law.

As a result, in the second half of the 1830s, England and Wales embarked on a programme of workhouse building to rival even the raft of 21st-century private finance initiatives. The investment of effort and cash was extraordinary: newly elected boards of guardians raised local taxes, purchased land, commissioned brickmakers and architects, signed contracts and sought workhouse staff. By 1838, around 95% of all parish locations had been incorporated into larger administrative units or “unions”, the vast majority with a repurposed or newly-built workhouse.

The workhouses were intended to be large and all encompassing: universal in their capacity. They were designed to cater for all varieties of poverty separately. There were discrete accommodations for men, women, and children with further adult subdivisions to differentiate the elderly, sick, and disabled from the vigorous, able-bodied and morally dubious.

But the delivery of welfare through workhouse placements only was never going to work as the ideologues intended. The austere sentiment, and the premise on which the law was founded, was faulty: the welfare bill was not being overblown by the capable poor, but was rising owing to the complexity and severity of need. Legislators had been afraid that people preferred to live idly on parish relief rather than work, when in fact subsequent research has shown they had been unable to earn enough to support themselves even if they were in full employment.

A workhouse regime could be imposed that coerced or compelled groups of people to undertake laundry, cooking, nursing or gardening. It could not deter people out of underemployment, age, or extreme youth. The result across the Victorian period was an expensive, burdensome, and frequently stigmatising set of institutions that never fulfilled their intentions. At the same time, money given to poor people outside of the workhouse was never abolished, and spending on this “outdoor relief” remained at least twice as high as spending on workhouses throughout the 19th century. Meanwhile, the workhouse very effectively punished the elderly and the unfortunate whose scope for work was very limited or nil.

Despite campaigns to abolish workhouses, the suffering of inmates, and potential applicants, continued well beyond the Victorian period. From 1930, workhouses became “public assistance institutions” – workhouses in all but name – and most surviving buildings entered ownership of the NHS in 1948 to be used as hospitals for the chronically ill.

In many ways, the desire to pull all of those in poverty under one roof, literally or figuratively in the case of Universal Credit, stems from the same impulses today as it did in 1834: a desire to drive down spending and make people work, or work harder. In both cases, a simple injection of cash, whether on buildings or for other purposes like the administrative integration of a new policy, cannot overcome the essential complexity of needs among those in poverty. When it comes to humane support, there is no such thing as “one strategy fits all”.