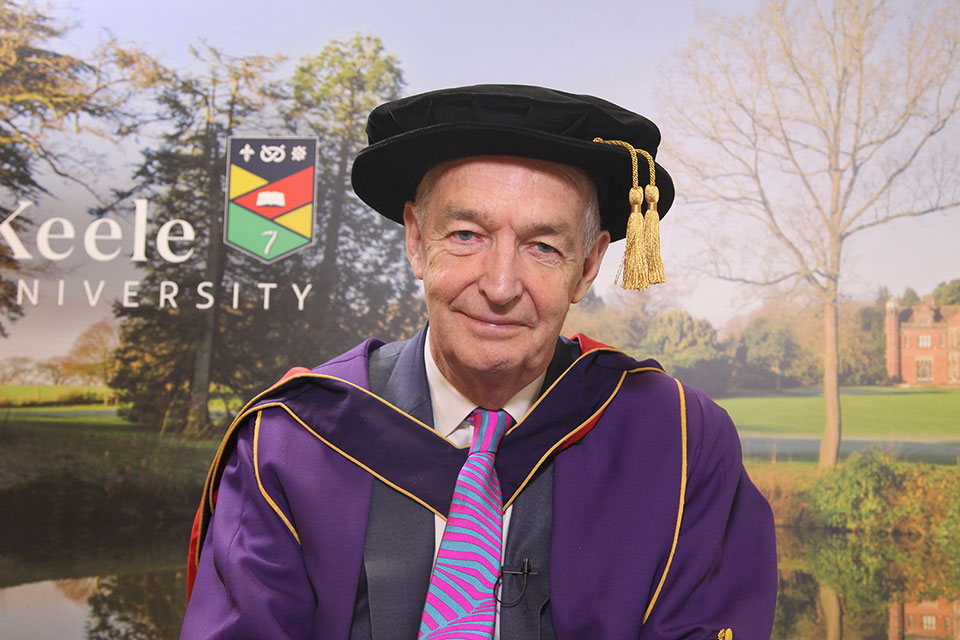 Journalist and TV presenter Jon Snow was awarded an honorary degree from Keele University for his outstanding contribution to journalism.

Speaking at his graduation ceremony Jon said: “Above and beyond the glorious education, and introduction to life that students have experienced at Keele, I think it’s the extramural things, that will shape what kind of person you will be in the society to come, when I spent a year in Africa at tender age of 18, it was a life-changing experience and then working at a deprived day centre for three years, it’s those experiences that live with me every day as a journalist and I became as informed from what I experienced on the ground.

“I think everyone should do something completely outside of their field of study, or related but also takes you deep into the heart of something your relatively unaware of. I envy you [graduates], you are at the threshold of the most important time of your lives. I feel incredibly honoured and would like to thank Vice Chancellor and staff for this great honour, it’s a great honour because if you don’t have a degree, it doesn’t get better than being offered an honorary one.”

Jon has a broadcast career spanning 45 years, and reported from all over the world, and is Channel 4’s longest-serving news presenter. He joined LBC radio in 1973, and ITN in 1976, and has reported from all over the world; Africa, Central America, the United States - where he was a resident Correspondent - and Rome. His most treasured reporting centred inevitably on the release of Nelson Mandela, and he became Main Presenter of Channel 4 News in 1989 and is still there today - making him their longest-serving news presenter.

Sharing his experience on the changing field of journalism and reporting on Brexit, Jon said: “When I first started as a journalist we had to do everything on film and had to wait hours for it to process, so journalism’s had an incredible transition. This can also mean coverage can also be superficial, though there’s still a high standard in British content.

“I think the difficulty with the Brexit referendum is it affects everybody personally, and I think journalists veered off from our own views to cover both sides, and I don’t feel happy how I reported on it at the time. I think the press felt shy of being honest with the scale of things we were discovering, and in order to not express bias, when we reported on something that was complete nonsense I think we soft pedalled rather than going tougher on it.”