The return of fascism? Why this is the wrong question to ask 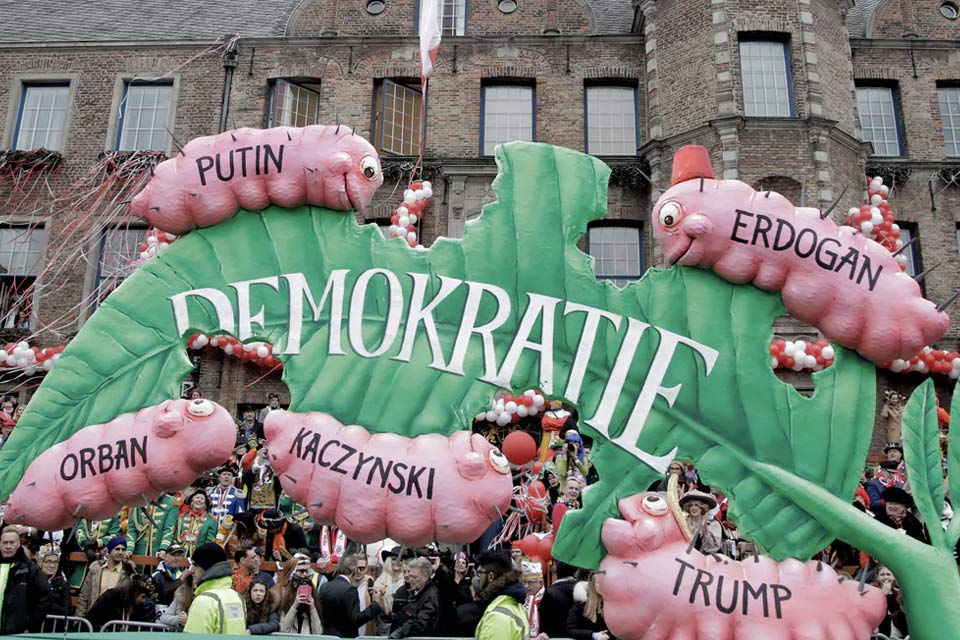 When a group of ultra-nationalist wannabes gathered in Milan in 1919 to hear firebrand leader Benito Mussolini speak, they became part of an infamous moment in history. There, Mussolini presented the founding manifesto of an unlikely radical political start up. Its name was Fascio di Combattimento, the humble precursor of fascism that was adopted as the name of the movement two years later.

A century on from the gathering, and after decades in the political wilderness, “fascism” is back in the news – not only as historical memory but as growing contemporary threat. Ever since the sensational victory of Donald Trump in the 2016 US presidential elections, the question “is fascism coming back?” has been voiced many times. It is also getting louder with each victory for populists like Jair Bolsonaro in Brazil or Matteo Salvini in Italy.

The question is understandable and legitimate. It is also largely misleading. The current explosion of incivility in everyday life and hostility to international liberal principles may illustrate striking similarities to the political and social milieu of the interwar years. But this does not mean that it is fascism 2.0, nor is it the main problem we should be worrying about.

Populists seem to be winning the communication game, shouting ever louder and promoting ever more divisive messages. In the process, they also pick up more and more votes in the polls. Meanwhile minorities are facing growing verbal and sometimes physical attacks. If contemporary populism speaks and behaves like “fascism”, then the chances are that it is fascism.

But if focus is primarily placed on name calling Trump or other luminaries of the current anti-liberal backlash, the focus is shifted to “them” and conveniently deflects attention from the heart of the problem – our own societies and beliefs. We frame the challenge as coming from some sort of extremism that is extraneous and alien to us. This is to obsess over the upshot rather than the cause.

In fact, the current rise of populism and illiberalism is, at present, only an angry backlash “from within”. These movements are a reaction to the arrogance and flaws of mainstream liberal politics. They expose its fracturing popular legitimacy and its growing inability to address the deeper causes of disaffection.

If one wishes to trade historical analogies, then one should recall that no “fascist” captured power by popular acclaim in the interwar years. They were only propelled to it by weaknesses in the democratic system and by serial mistakes and miscalculations by the liberal elites themselves. It may be tempting to over-emphasise the success of interwar fascism in bringing down the liberal system across central and southern Europe in the 1930s. But it is also equally comforting to talk about the rise of fascism as a mere threat to liberal disintegration rather than its symptom.

In the end, it does not matter so much if Trump or Hugary’s Viktor Orban is “fascist” or something else. What does matter is whether they can effectively manipulate the existing – and very real – dysfunctionalities of liberal political systems and the anxieties of mainstream societies to normalise poisonous incivility towards minority and non-native groups. It matters whether they can exploit the weaknesses to close down minds and borders and revive a narrow vision of community that excludes, silences and persecutes those it arbitrarily deems alien and threatening.

The historical deja vu may actually lie elsewhere – not in the so-called extremists or populists but inside the mainstream. Just like the 1930s, liberal elites may have overestimated the strength and social acceptance of liberal values. They may have been complacent about the ubiquity of civil self-restraint, empathy towards others and inter-dependence. Fascists or not, the current brand of illiberal populists and their growing supporters feast from the deep contradictions still present in mainstream society and the arrogant complacency of liberal elites. In doing that, they also break one taboo after another and open up a host of previously unthinkable or implausible possibilities for radical action in the near future.

In one of his early speeches as leader of the still fringe National Socialist German Workers’ Party, Adolf Hitler reflected on the role of his party and his leadership. He said that its goal was to “furnish the sword” which many more could then wield ever more fiercely against their perceived enemies. The world is now once again teeming with charismatic people able to take that sword. They lament the alleged decline of civilisation and evangelise an alternative future of national renewal and greatness. They are preaching to a deceptively large body of converted, the overwhelming majority of whom are no extremists but inhabit mainstream society. They are whipping up old fears, ingrained prejudices, and new anxieties about “invasions” and identity dilution. They also provide the tools and the audience for others to go much further down that radical, aggressive path.

Whatever they are, these people confront us with the failings of our political system and the numerous contradictions in our mainstream societies that get so often ignored or airbrushed. They must be stopped – but only by addressing the deeper social causes of what makes their message appealing to so many others: growing distrust in politics, resentment at the fast pace of change, hardship in everyday life.

The successes of contemporary populists should remind everyone that fascism may have been crushed in 1945, as postwar societies have so often been told ever since; yet the political, social, and cultural forces that sustained it in the first place never went away. This is perhaps the most useful “lesson” from history – that there are no final victories – or defeats.