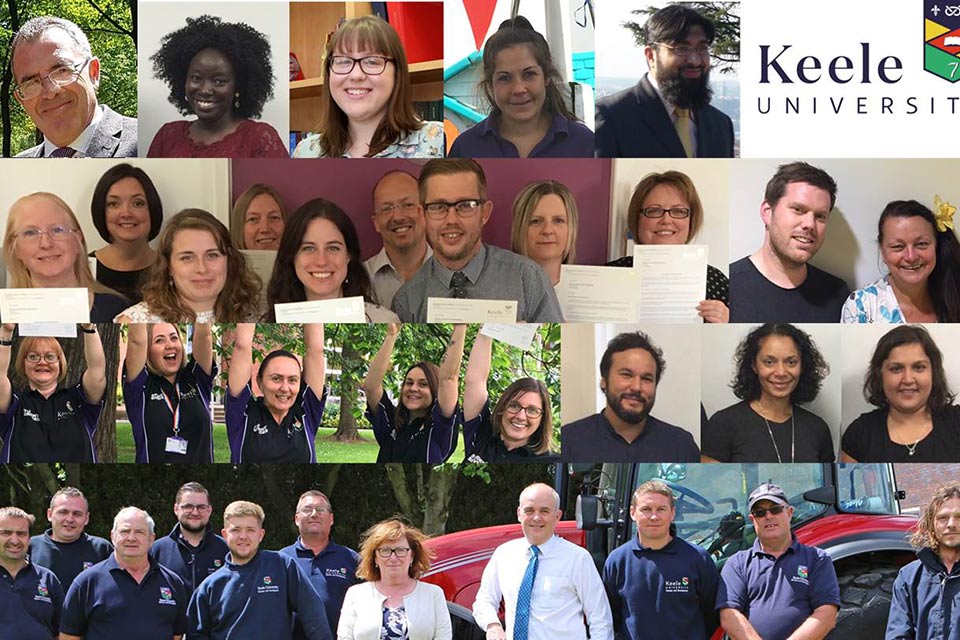 Keele has an established award scheme for the recognition of excellence in teaching and supporting learning. In November 2017 the scheme was expanded to include a number of new award categories which are aligned to the University’s key strategic themes and to enable colleagues from all staff groups to be nominated.

David Watson and Trish Procter are Lecturers in Biochemistry and Biomedical Science (respectively), based in the School of Life Sciences. Over the last three academic years David and Trish have lead an innovative initiative, across all undergraduate levels and subjects in the school, which addresses the need for the development of integrated generic and professional skills, within discipline-based contexts and core course content.

Working in collaboration with the Student Learning Team, Careers and Employability, as well as a range of external speakers and partners, they have developed a model of progressive skills conferences and workshops from Level 4, through to Level 6, focusing on academic skills development, professional skills development and culminating in a final year Student Research Conference to showcase students’ academic and professional development journey.

Student feedback has been outstanding and the model looks set to be rolled out more widely across the University.

Over the last eight years, Naveed has received close to forty Keele Excellence Award nominations from students, highlighting the significant positive impact he has had upon students studying Politics and International Relations at Keele. These nominations focus, amongst other things, on Naveed’s highly engaging and thought-provoking teaching approach, through which he is able to make some of the most complex topics in International Relations, Security Studies and Middle East Studies accessible to all.

Naveed has been nominated for his approachability and willingness to provide support for all students even outside regular work hours, his engagement in academic, personal and professional development matters. Also mentioned, was his interactive and inclusive teaching approach which involves all learners at all times, his use of novel technologies for feedback, scheduling and communication, his down-to-earth sense of humour and his unrivalled expertise in, and enthusiasm for his subject.

As one student has written: ‘Naveed is quite simply an extraordinary academic and one whom it is a privilege to study under’.

Aligned with the University’s strategic themes

The following winners have been recognised for their significant contribution and achievement in line with the University’s strategic themes.

Ian plays a key role in the Smart Energy Network Demonstrator (SEND) project, the primary aim of which is for the University to become energy self-sufficient while becoming a national research and development facility.

As Project Manager Ian is responsible for ensuring the project is delivered and to achieve this has had to find innovative solutions to significant challenges, working in true partnership with a range of stakeholders.

Ian has worked beyond normal expectations and has demonstrated significant determination, dedication and professionalism to ensure the project’s success in terms of deadlines and compliance.

The panel agreed that Ian’s nomination highlighted the excellent and sustained contribution he has made towards the delivery of the Smart Energy Network Demonstrator (SEND), often going above and beyond role expectations to ensure appropriate solutions are found. The panel noted the initiative he has shown in his work and that he often makes wider contributions to the University, beyond the SEND project.

As Faculty Learning Technology Officer in the Faculty of Humanities and Social Sciences Cat is a creative developer of practical tools that seek to make technology accessible for staff and students.

Cat led on the implementation of electronic marking and assessments in the School of Law, SPIRE and Humanities which was a complex and challenging task in which Cat’s technical and people skills proved critical.

The panel were particularly impressed by the innovative work Cat has undertaken in the Faculty of Humanities and Social Sciences to improve teaching by improved use of IT and technology enhanced learning. The panel noted that the success of such initiatives has largely been attributable to Cat’s creative development and influencing skills and also recognised the positive impact her work has had on both staff and students.

Danielle’s role as Room Leader in the Nursery is to manage a small team and to care for and educate the children in her room.

Danielle has created and developed the Nursery allotment and natural garden and has introduced chickens, bird boxes and a bug hotel. She has also worked closely with Newcastle Borough Council to support their work within the community around the sustainability agenda.

Danielle’s nomination highlighted the sustained effort that she has made over several years to develop and maintain the nursery allotment and natural garden as well as a number of other related projects, all of which have ultimately benefited the nursery children. Danielle has shown a passion and determination which the panel highly commended. The panel wholeheartedly agreed that Danielle’s nomination was an excellent example of a member of staff positively contributing to the development of environmental sustainability beyond the scope of their role.

Cerys is an administrator in the School of Geography, Geology and the Environment. In addition to the requirements of her role, Cerys established and manages the School’s Twitter account and Facebook page and has reinstated the School’s photo competition which she launched via social media.

Cerys continually looks for ways to develop her skill set and through the ERASMUS scheme was able to visit Radboud University in the Netherlands earlier this year. Cerys returned from the trip with some great ideas regarding sustainability.

The panel were impressed by Cerys’ contribution to a diverse range of activities, including internationalisation and environmental sustainability. They also commended the initiative she has shown in relation to the use of social media, both to connect with students and to showcase the School, its staff and students.

The team, led by Jo Ladwa, is responsible for ensuring Admissions processes run smoothly and efficiently.

The nomination highlighted the incredible work undertaken by the team particularly in light of significant workload increases and staffing changes.

The panel were impressed by the team spirit demonstrated and the way in which the team have pulled together and “gone the extra mile” to ensure deadlines are met and tasks completed as well as consistently ensuring the successful organisation of the annual clearing and confirmation activities.

Advancing Race Equality is a key objective of the University, requiring staff and student engagement and support. A number of significant pieces of work are being undertaken across the University currently towards the achievement of this objective. Key groups contributing to this work are the Black and Minority Ethnic Staff Network and the Race Equality Charter self-assessment team.

Harj, Sammyh and Udeni were identified as key contributors to this important area of work.  The panel recognised that the valuable work they undertake to support Equality, Diversity and Inclusion at Keele is outside the expectations of their roles and is vital in advancing EDI initiatives at the university.

Led by John Knott, the Grounds team are responsible for the continuous development of the grounds service on campus and ensuring the biodiversity, longevity and overall success of the grounds provision at Keele.

The panel were very impressed to see that three nominations had been received for the Grounds team and felt that the team were very deserving of an award. The nominations highlighted the way in which the team have consistently worked ‘above and beyond’ in a range of circumstances, most notably working tirelessly to ensure that the campus was safe for staff, students and visitors during the extreme weather experienced during the winter months.

The panel also commended the team on the way in which they have welcomed and looked after new members of the team, ensuring they felt comfortable and part of the team from day one and assisting with their development beyond normal expectations.

The Money and Welfare Team assist students to manage their funds, create budgets and ensure that they receive any funding for which they may be eligible.

The nomination highlighted the excellent, innovative work the team have been involved in, including the re-development of the Keele Welcome pages and the introduction of the Keele Welcome App and Blackbullion. This work and other key initiatives the team have worked on have received excellent feedback from students and have undoubtedly enhanced the student experience.