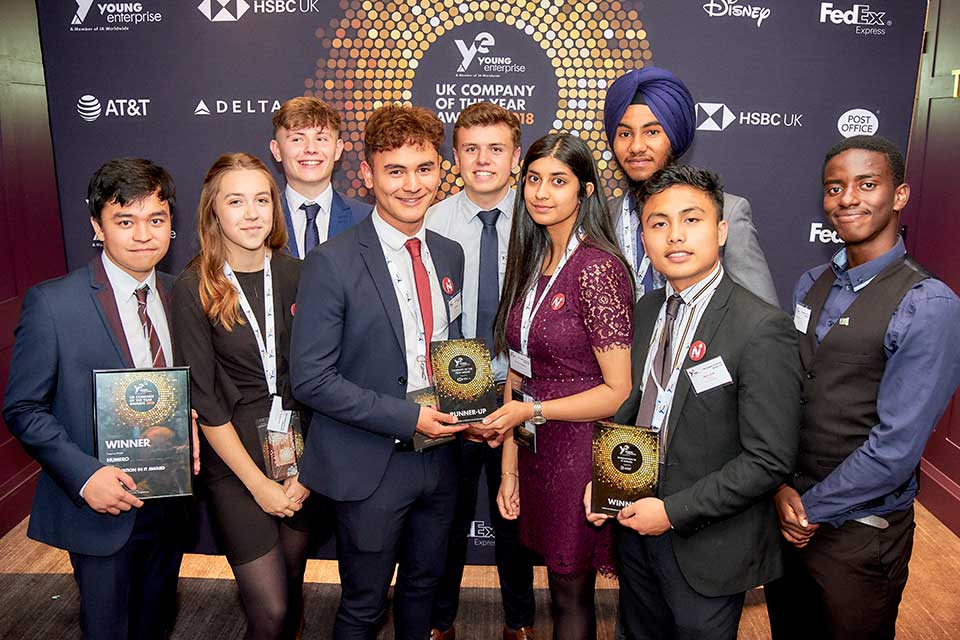 A student company from St John Fisher Catholic College has won the ‘Innovation in IT’ award and been named overall runner-up at the Young Enterprise Company of the Year 2018 awards, after working with Keele’s School of Pharmacy to develop their innovative business idea.

The student team, Numero, worked in collaboration with Keele University’s School of Pharmacy to design and create a maths app for secondary school students, using augmented reality to support student learning. After being named Staffordshire Young Enterprise Company of the Year in March, the team went on to win the West Midlands round of the competition in June, before progressing to the final round.

There were fourteen teams at the final, held at County Hall, London, representing regions across the UK including Northern Ireland, Scotland and Gibraltar, competing for a range of awards.

At the final, the team of 18 sixth form students from St John Fisher Catholic College were judged on several factors. They submitted a company report, held a trade stand to display their marketing and branding, and had a business interview to explain the journey of their product. The collaboration with Keele University was showcased in this journey. The team used technology that was originally developed for undergraduate Pharmacy students at Keele after being inspired by the ‘PharmaCARDs’ used in the School of Pharmacy. The student company were also aided in their app design by Luke Bracegirdle, Head of Digital and Business Analytics in the School of Pharmacy at Keele.

Mr Bracegirdle, who worked closely with the students to create the bespoke Numero app said:

“I'm delighted that Numero won the Innovation in IT category at the Young Enterprise Company of the Year awards, and were runners up for the overall Company of the Year.  Through my work at Keele University, I have the pleasure of knowing such a dedicated, inspirational and highly motivated group of young entrepreneurs. I have no doubt they will lead the Numero student company to every success."

“We are extremely proud of Numero’s achievements in the Young Enterprise Company of the Year competition. This is the first year that our school has taken part in this programme, and it is incredible for Numero to be voted winner of Best Innovation in IT and runner-up of the overall Company of the Year 2018. This success is down to the dedication and hard work of our students, and the excellent support our students have received from Luke Bracegirdle and the School of Pharmacy throughout the programme. We would sincerely like to thank Keele University for helping to make this possible.”