Announcing our Student of the Year 2018 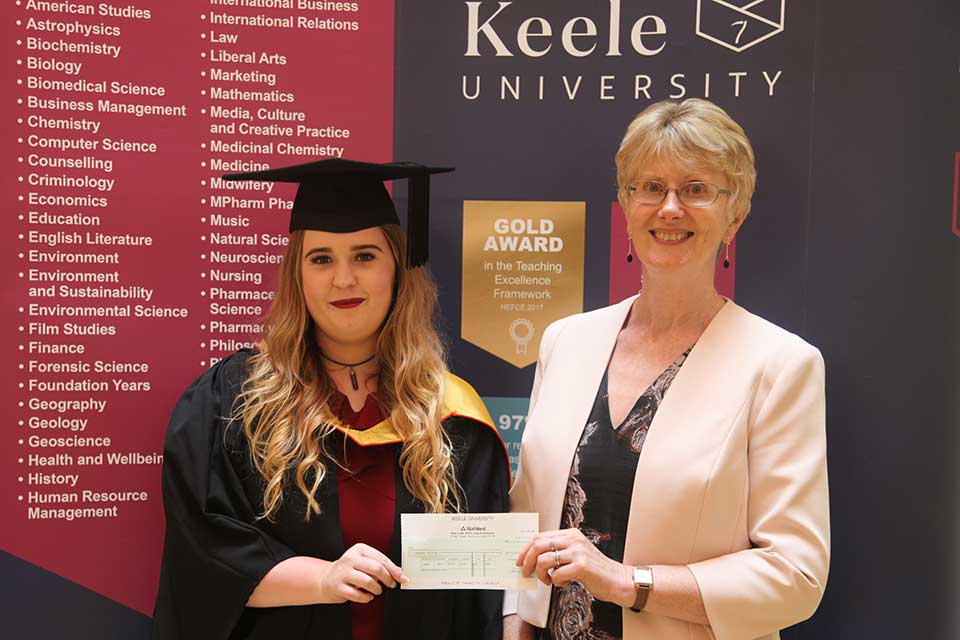 Keele University is delighted to announce the thirteenth Neil and Gina Smith Student of the Year Award. From an exceptionally strong pool of candidates, the awarding panel decided that Lauren Mullan would be the recipient of the 2018 award, which comprises a prize of £5,000 and recognises a student with outstanding achievement.

Lauren is graduating with a first class degree in Psychology. Lauren’s resilience and drive have helped her to manage caring responsibilities for her now late grandmother, who she cared for since becoming a teenager - whilst also succeeding academically, and contributing to the Keele community in her non-academic endeavours too.

Demonstrating advocacy for students in similar personal situations, Lauren worked with Student Services to write a blog sharing her experiences, and encouraging students with caring responsibilities to pursue a university education. Lauren was also involved with a mental health campaign run by the Keele University Students’ Union, working with the Education Officer to raise awareness of mental health at university and to emphasise the importance of talking about it.

Alongside her studies at Keele, Lauren has also worked in the Students’ Union bar, progressing to bar manager, and then to duty manager.

Lauren will be pursuing a Masters degree in social work at Keele in the forthcoming academic year.

Speaking about her Student of the Year award, Lauren said:

“Winning Student of the Year is an incredible achievement, and I’m really proud of myself. It’s overwhelming, it’s scary, but it’s also really good! I’ve overcome personal adversity - I’ve been a young carer since I was 13 and recently lost my Nan over Christmas, who I lived with and who I was a carer for. Being a young carer and balancing university is difficult, but it is definitely doable, and I’m here now because of what I’ve done. You can still enjoy a social life, you can still be a carer, and you can still commit to the person that you’re caring for.”

The other Student of the Year finalists - Elliot Lancaster, Ryan Stanyard, and Rebecca Saddington-Wiltshire - were all highly commended by the panel.