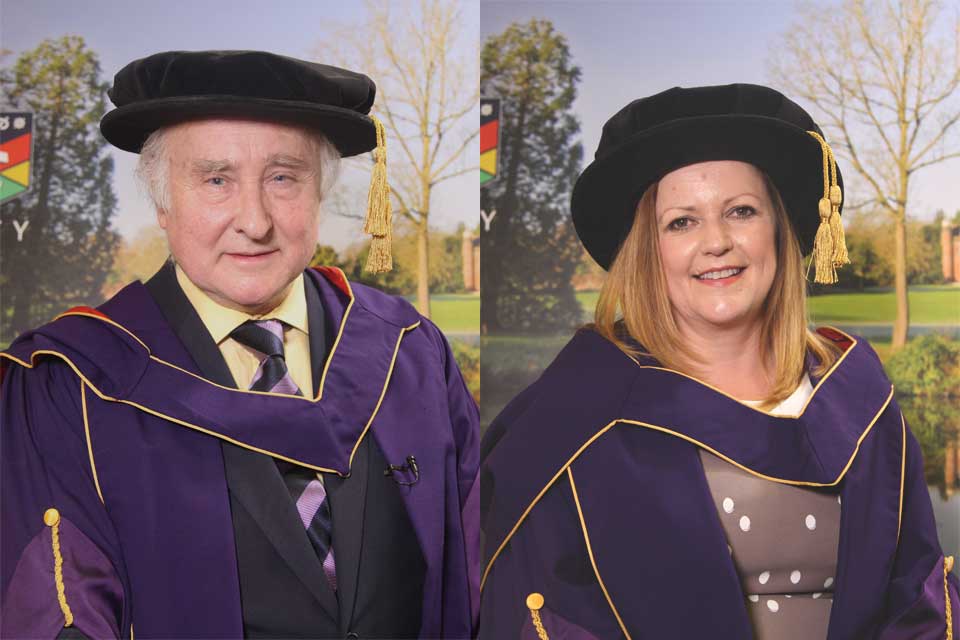 In recognition of their outstanding achievements and contributions to society, Sinéad Butters MBE and Professor David Croisdale-Appleby have been awarded honorary degrees at Keele University.

Sinéad, who grew up in Staffordshire and is a Keele Alumna, has been Chief Executive of Aspire Housing since 2006 and is passionate about housing associations and the nationally critical role they play in support of the economy and community well-being.

Reflecting on her award, Sinéad said:

“I’ve been a friend of Keele since I graduated here in 1988, and being awarded an honorary degree 30 years later is just brilliant - so thank you. And also thank you to Aspire, and all of my colleagues there - if it wasn’t for the whole team of people behind me then I wouldn’t be here.”

“Find out who you are, what you are passionate about, and make it the centre of your world, and don’t settle for anything less.”

Professor David Croisdale-Appleby, who holds postgraduate degrees in five academic disciplines and Professorships in no fewer than six academic disciplines, has devoted much of his life to representing the interests of vulnerable, disadvantaged and disabled people across the world, and has led many charities in this context.

“This achievement feels wonderful, I don’t think there’s any other word for it. It’s a tremendous honour to receive an honorary degree. To be amongst so many exciting young people who are also graduands today is the most enlightening and elevating experience.”

“I think that one of the most impressive things about Keele, is the quality of both its School of Medicine, and its School of Nursing and Midwifery. In the world that I work in, the NHS and the Department of Health, these are both really exceptional, so for those graduands today from Medicine, and Nursing and Midwifery, they are coming from one of the best schools in the country, and certainly one of the very best universities.”