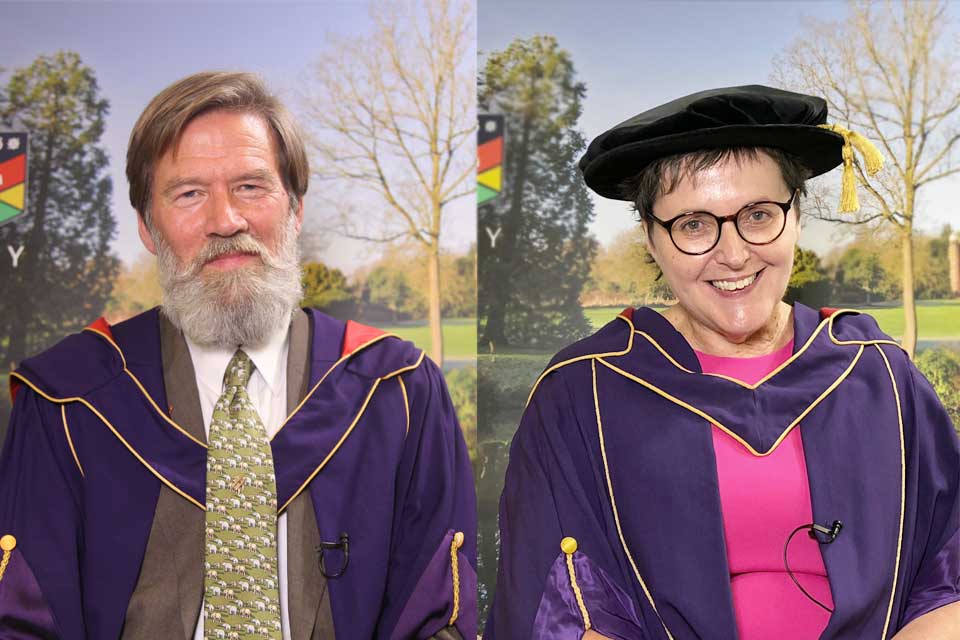 In recognition of their outstanding achievements and contributions to society, Keele Alumni Ian Redmond OBE and Lynn Saunders OBE have been awarded honorary degrees at Keele University.

Ian Redmond OBE is a tropical field biologist and conservationist, renowned for his work with great apes and elephants. He graduated from Keele in 1976, and for more than 40 years he has been associated with mountain gorillas, through research, filming, tourism and conservation work, and has been involved in more than 50 documentaries on the subject. Ian has been awarded Doctor of Science in recognition of his outstanding contribution to animal conservation and sustainable ecology.

Reflecting on his award, Ian said:

“Sometimes, working in conservation feels like you’re banging your head against a brick wall year after year after year, so if someone taps you on the shoulder and says ‘actually we think you’re doing a good job’, it’s very gratifying. I’m especially grateful as a Keele graduate myself - it’s a long time since I got my first degree here.”

“Finding that which makes you excited, that which grabs your passion, and trying to do that for a living is, in my view, more important than looking for the salary that delivers the most luxury in your life, because I think doing something that you love and enjoying it every day is a rare thing, sadly. That’s what I would encourage graduates to do - look for what excites you and makes you interested and makes you want to engage each day.”

Lynn Saunders OBE is Governor of Whatton Prison and has worked for the Prison Service for 25 years. She has worked with people convicted of sexual offences for most of her career and is considered to be one of the more knowledgeable and compassionate prison Governors in this difficult and controversial area. Lynn has been awarded Doctor of Letters in recognition of her outstanding contribution to improve the treatment and rehabilitation of offenders, both nationally and internationally.

Reflecting on her award and time at Keele University, Lynn said:

“I’m really delighted, it’s really exciting to be back here after quite a long time since I was an undergraduate. I think about my time here at Keele, and I saw it as a new beginning to think about what I was going to do with my future, and what I would say to people is that it’s important to find something that you’re passionate about and that you really care about, and really work hard and just make it work for you, and if you do that, everything else just falls into place.”