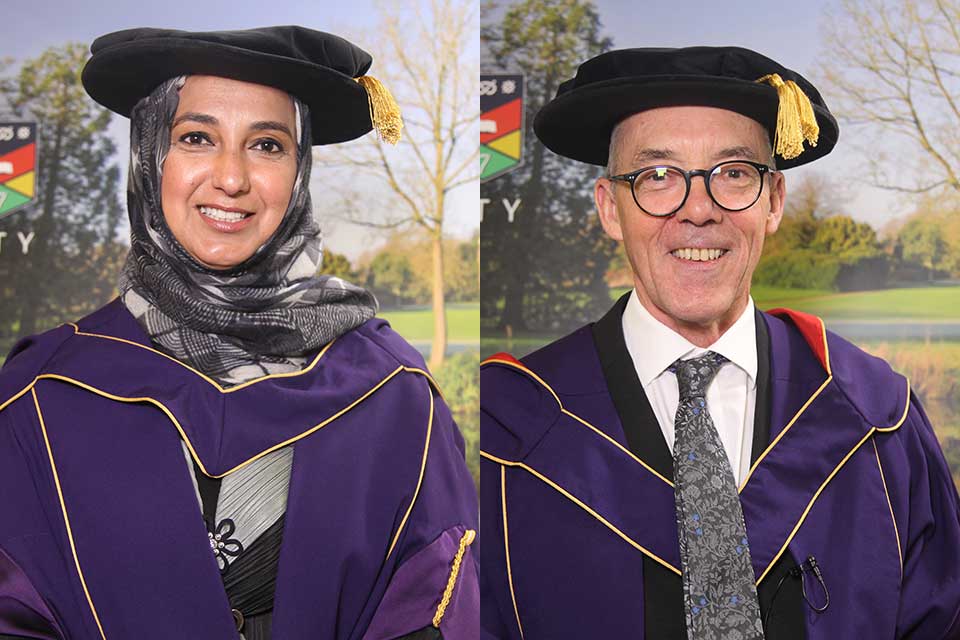 In recognition of their outstanding achievements and contributions to society, Dr Nawal Al-Hosany and Mike Jackson have been awarded honorary degrees at Keele University.

Dr Nawal Al-Hosany is the Permanent Representative of the UAE to the International Renewable Energy Agency (IRENA) and also holds the position of Deputy Director General of the Emirates Diplomatic Academy (EDA). She has been awarded Doctor of Letters in recognition of her outstanding contribution to the development of renewable energy and sustainability.

“I’m extremely humbled, it is a great privilege and honour and I'm very grateful for Keele’s recognition, but it's also a testimony of Keele’s commitment to sustainability, and its global outlook, to identify somebody all the way from the United Arab Emirates for this award.”

“Follow your passion. Equip yourself with all the tools you need, and remember, this is not the end of your education, it is just the beginning. You have the power, and you need to try and exert that power and change the world for the better.”

Keele Alumnus Mike Jackson graduated in 1980, and during his time at Keele founded North Staffs Gay Switchboard, an information and counselling service offering support to LGBT people. He then went on to become co-founder of Lesbians and Gays Support the Miners (LGSM) during the 1984 Miners’ Strike - which was immortalised in the award-winning film ‘Pride’. He has been awarded Master of the University in recognition of his outstanding contribution to social justice and equality.

Reflecting on his award and experience at Keele, Mike Jackson said:

“I’m really excited to be here, it’s quite an honour, and I never expected it. For me, it’s particularly poignant as Keele is where I did my undergraduate degree. To graduating students - congratulations, well done, and keep up the good work! And remember what a privilege and honour it’s been to have the benefit of a degree. Go out into the world and help change it and use that education to make it a better place. I think I did that, I didn’t expect it, but I actually helped to change the world essentially for the LGBT community. Undoubtedly that was very much helped by all the confidence that I gained being an undergraduate at Keele.”