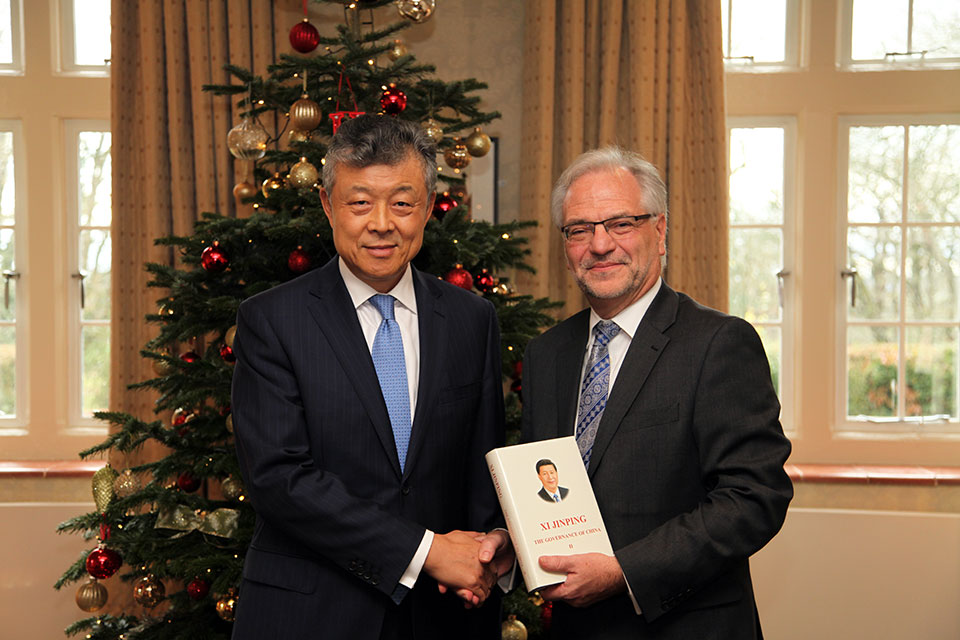 Keele was pleased to welcome His Excellency Ambassador Liu Xiaoming, Ambassador of the People's Republic of China to the UK, to the campus earlier this month.

The Ambassador, accompanied by his wife and colleagues from the Chinese Embassy, was welcomed as a guest speaker in the Keele World Affairs series. As part of the programme of lectures on international politics and global issues, the Ambassador was invited to speak about the impact of China’s global engagement following the country’s economic reform and the decision to open up the country with an Open Door Policy in 1978.

Ambassador Liu Xiaoming also met with Vice-Chancellor Professor Trevor McMillan during the visit to discuss the capacity for greater cooperation between British and Chinese universities.

Dr Katie Maddock, interim Head of School of Pharmacy, and Reg Icli, Learning Technology Officer, provided a demonstration of Keele’s 3D Health Cinema and augmented reality teaching facilities. The Ambassador and the Embassy team also met with 33 students from China who shared their experiences of living and studying at Keele.

"It was a great honour to welcome Ambassador Liu Xiaoming to Keele University, to meet some of our fantastic students and staff, and take a tour of our impressive augmented reality facilities. As a University, we are committed to developing high quality partnerships in China - we recently launched the first collaborative programme of its kind jointly delivered by Keele University and Beijing Foreign Studies University (BFSU) in China. It was a pleasure to discuss future opportunities for collaboration with the Ambassador.

"The Ambassador was very pleased to hear about the significant collaboration between Keele and BFSU, one of China’s top universities; he was particularly impressed that the new joint programme in International Governance and Public Policy had recruited its maximum number of 80 students to the first cohort.

"It was very reassuring that His Excellency Mr Liu endorsed Keele’s strategy for China, agreeing that developing high quality partnerships with a small number of selected universities was the best approach."

At the Keele World Affairs meeting, the Ambassador’s speech emphasised the tremendous progress China had experienced in the last 40 years, and how this had led to changes for the better in the country. He discussed the new focus upon high quality growth within China, and connecting countries through initiatives such as the ‘Belt and Road’ initiative, in order to share the benefits gained through trade, infrastructure, sustainability, investment, and community development between nations. The Ambassador concluded his speech by reaffirming China’s commitments to multilateralism, free trade, and upholding the qualities of peace and stability.