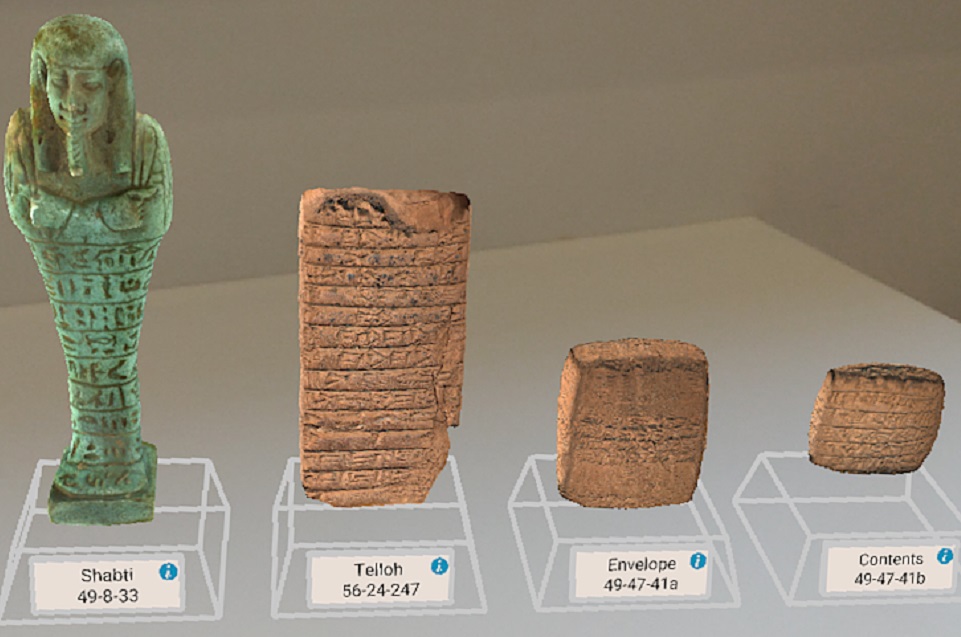 Picture caption: A screenshot from the new app, highlighting how separate artefacts from the same collection can be brought together.

A new mobile app developed by Keele computer scientists will bring museum exhibits to life in augmented reality (AR) for the purposes of research, collaboration, and education.

The app has been developed by a Keele research team led by Dr Sandra Woolley in collaboration with researchers from the UK, Germany and China. It features photo-realistic 3D-rendered models of artefacts that can be interacted with and studied in detail in ways not possible in a traditional museum setting.

Dr Woolley and her team have developed the app as a proof-of-concept for scholars, researchers and enthusiasts alike to supplement museum experiences and provide access to artefacts that may not normally be on display.

Developed for iPhone and Android, the current version of the AR Museum app was inspired and supported by the Lead Curator of Antiquities, Dr Ashley Cooke at National Museums Liverpool, and features a digital collection of artefacts from the World Museum that can be studied and interacted with, allowing users to “curate” their own collections of artefacts and view them alongside one another.

Dr Woolley added that the apps have the potential to make museums and antiquities more accessible to everyone, and that they could increase collaboration between scholars internationally by enabling them to virtually unite artefacts from within and between different museums around the world, enabling them to be studied together remotely and in detail.

The current version of the apps includes 3D models of a clay envelope and its contents inscribed in ancient ‘cuneiform’ script, viewable either as separate artefacts or in their reconstructed enveloped form, with the AR apps enabling animated opening and ‘X-ray views’ of the contents within. In this way, the apps allow users to visualize individual objects and reconstructions that can incorporate artefacts held in different museums.

Dr Woolley said: “The potential of augmented reality is vast for scholars as well as members of the general public with an interest in history and museum exhibitions.”

Dr Woolley and her co-authors presented the AR apps at the International Conference of Digital Heritage 'Euromed 2020' in November.