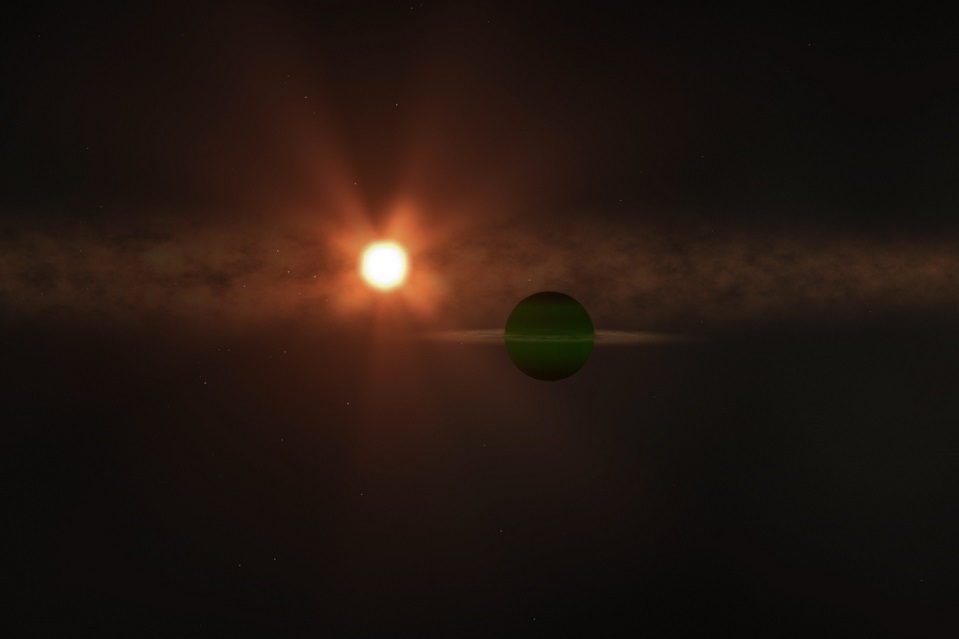 A new planet has been discovered orbiting a unique young star after more than a decade of searching, thanks to a global research team including a Keele astrophysicist.

Located around 31.9 light years away, the star AU Microscopii (AU Mic) has been studied by scientists for years as it provides a unique insight into how planets and their atmospheres form, evolve and interact with their stars.

For more than ten years astronomers have searched for planets orbiting AU Mic and now, using data from NASA’s Transiting Exoplanet Survey Satellite (TESS) and retired Spitzer Space Telescope, they have reported the discovery of a planet orbiting the star.

The planet is around the size of Neptune and circles AU Mic in just over a week, and has been named AU Mic b, with Keele’s Professor Coel Hellier among the experts to have contributed to its discovery.

Professor Hellier said: “Our data helped to show that AU Mic is a very young star, covered in starspots. This makes it harder to look for planets since a planet projected against the face of a star looks much like a starspot.”

Young stars such as AU Mic have strong turbulent motions that generate strong magnetic fields, which are the cause of starspots — cooler, darker and highly magnetic regions similar to sunspots — that frequently erupt in powerful stellar flares. Both the spots and their flares contribute to changes in the star’s brightness.

The discovery was made by analysing the light coming from the star and measuring any dips in light output, which were caused by the planet crossing in front of the star in an event known as a transit.

Regular dips in a star’s brightness signal the possibility of a transiting planet, and usually, it takes at least two observed transits to recognize a planet’s presence.

Study co-author Diana Dragomir, a research assistant professor at the University of New Mexico in Albuquerque said: “As luck would have it, the second of three TESS transits occurred when the spacecraft was near its closest point to Earth. At such times, TESS is not observing because it is busy downlinking all of the stored data.

“To fill the gap, our team was granted observing time on Spitzer, which caught two additional transits in 2019 and enabled us to confirm the orbital period of AU Mic b.”

Spitzer was a multipurpose infrared observatory operating from 2003 until its decommissioning on January 30th, 2020. The mission proved especially adept at detecting and studying exoplanets around cool stars. Spitzer returned the AU Mic observations during its final year.

The findings of the study, led by Peter Plavchan, an assistant professor of physics and astronomy at George Mason University in Virginia, have been published in Nature.