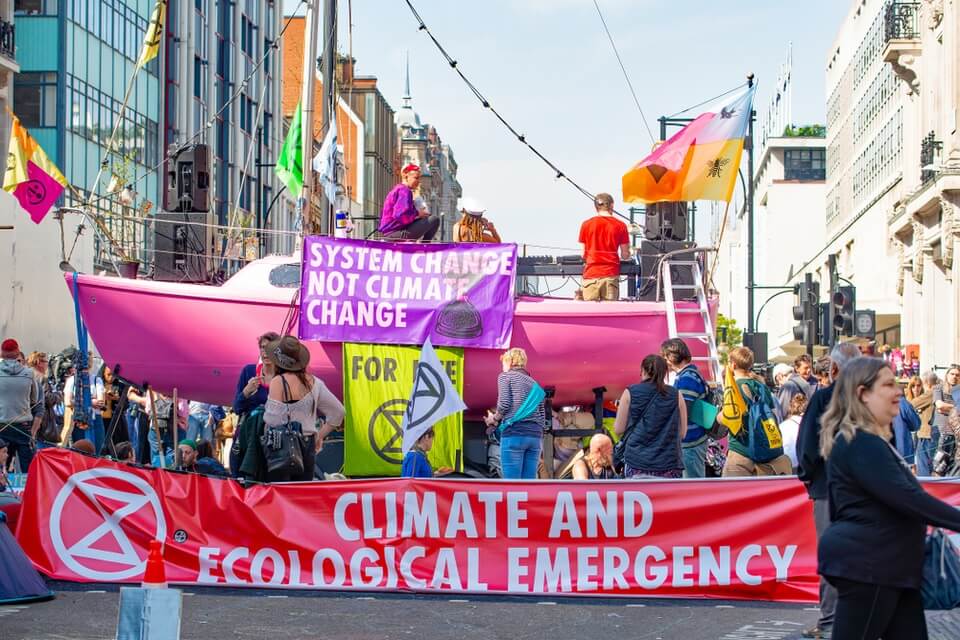 Extinction Rebellion (XR) supporters are more likely to be new to protesting than other environmental activists, a new study shows.

The research found 10% of those who took part in the group’s protests in April 2019 were first-time demonstrators, twice the proportion of “novices” at climate marches a decade before. The study also shows activists who took part in Extinction Rebellion’s major protests were overwhelmingly middle class, highly educated, and southern.

The research, funded by the Centre for the Understanding of Sustainable Prosperity, shows Extinction Rebellion activists in London last year had a much broader and more diverse age profile than has been the case in other environmental direct-action protests.

Around 85% of those who took part in the action in London in 2019 had a degree, and a third had a postgraduate qualification. Two thirds identified themselves as middle class. A high proportion were self-employed, part-time workers, or students.

The majority of protestors surveyed said they most closely identified with the Green Party (59.1%), followed by Labour (15.5%), There was almost no support among Extinction Rebellion activists for the Conservative Party, and very little for the Liberal Democrats.

Professor Brian Doherty, Professor of Political Sociology from Keele University, said: “We found Extinction Rebellion activists are much more likely to vote and be members of political parties than the general population, but they are also sceptical about the ability of political parties and government to deliver effective solutions to environmental problems.”

Three-quarters of those who were charged with offences lived below the Severn-Wash line, which traditionally separates the north and south of England.

XR activists were mostly non-metropolitan. A third of those who appeared in court were from the West Country with hotspots in Stroud, Totnes and Frome, whereas just six per cent of those who appeared in court after the protests were from Birmingham, Greater Manchester, Liverpool, Leeds, Bradford, Sheffield, Newcastle, Glasgow, Edinburgh, Swansea and Cardiff combined.

Professor Clare Saunders, from the University of Exeter, said: “Our analysis shows one strength of Extinction Rebellion has been to involve people who are not natural protesters, and perhaps even less so natural law-breakers, but who were already persuaded of the rightness of the climate cause, and frustrated with the inability of both politicians and lifestyle environmentalism to bring about change.

“Mobilising this group enabled Extinction Rebellion to significantly expand the numbers of people willing to engage in environmental direct action, broadening its age profile, and bringing non-violent direct action on climate change into the centre of political life in the UK.”

People of all ages were arrested, but more people aged 56 and over were charged with an offence (32.2%) than those participating in the action as a whole (23.1%).

Researchers observed hearings at the City of London Magistrates Court, on seven separate Fridays in August, September, and October 2019, witnessing the cases of around 17% of those charged during the second phase of the protests.

In only two of the 144 court cases observed relating to arrests during the April 2019 protest did protesters have any previous convictions for protest action. However, 12.4% of the participants in the second October 2019 protests had previously been arrested at a protest.

Dr Graeme Hayes, from Aston University, said: “Protestors said they did not believe in reliance on companies and the market, governments, or lifestyle changes by individuals to solve the climate crisis. Almost all said they were protesting to raise awareness of the climate emergency, and to pressure politicians to act.

“This is a potential point of contention for Extinction Rebellion. Its strategy emphasises lobbying the government for action, but its activists do not think the government can deliver.”