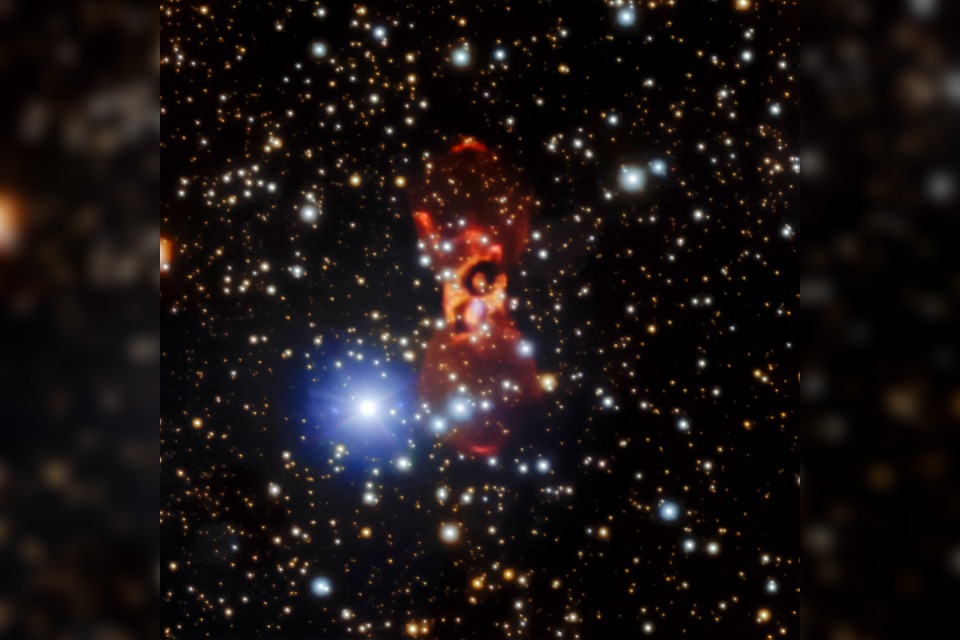 An international team of researchers co-led by Keele’s Professor Nye Evans has uncovered extraordinary new insights into a centuries-old discovery among the stars, which has intrigued astronomers since the 17th century.

CK Vulpeculae was first seen as a bright new star in 1670, and was first discovered by the French monk Anthelme Voituret. It was studied by the leading astronomers of the day, and got consistently brighter before fading after around a year.

This led to CK Vulpeculae being considered as the first documented example of a nova — a fleeting astronomical event arising from an explosion in a close binary star system.

But new research, published in The Astrophysical Journal Letters, has found that CK Vulpeculae is approximately five times farther away than previously thought, which makes the 1670 explosion much more energetic than previously estimated. This also puts it into a mysterious class of objects that are too bright to be members of the well-understood type of explosions known as novae, but too faint to be supernovae.

The findings were recorded using observations made from the international Gemini Observatory, a Program of National Science Foundation’s NOIRLab, which reveal that this enigmatic astronomical object is much farther away and has ejected gas at much higher speeds than previously reported.

The research team, co-led by Professor Evans alongside Professor Dipankar Banerjee of the Physical Research Laboratory Ahmedabad, India, and Dr Tom Geballe of Gemini Observatory, initially planned to use the Gemini Near-Infrared Spectrograph (GNIRS) instrument to confirm the 2018 detection of radioactive aluminium at the heart of CK Vulpeculae.

After realising that detecting this in the infrared would be far more difficult than they originally thought, the astronomers improvised and obtained infrared observations across the full extent of CK Vulpeculae, including the two wisps of nebulosity at its outermost edges.

Professor Evans said: “In terms of energy released, our findings place CK Vulpeculae roughly midway between a nova and a supernova. It is one of a very few such objects in the Milky Way and the cause — or causes — of the outbursts of this intermediate class of objects remain unknown. I think we all know what CK Vulpeculae isn’t, but no one knows what it is.”

Dr Geballe said: “The key to our discovery was the GNIRS measurements obtained at the outer edges of the nebula. The signature of redshifted and blueshifted iron atoms detected there shows that the nebula is expanding much more rapidly than previous observations had suggested.”

Lead author and astronomer Professor Banerjee said: “We did not suspect that this is what we would find. It was exciting when we found some gas travelling at the unexpectedly high speed of about 7 million km/hour. This hinted at a different story about CK Vulpeculae than what had been theorised.”

By measuring both the speed of the nebula’s expansion and how much the outermost wisps had moved during the last ten years, and accounting for the tilt of the nebula on the night sky, which had been estimated earlier by others, the team determined that CK Vulpeculae lies approximately 10,000 light-years away from the Sun — about five times as far away as previously thought.

That implies that the 1670 explosion was far brighter and released roughly 25 times more energy than previously estimated. This much larger estimate of the amount of energy released means that whatever event caused the sudden appearance of CK Vulpeculae in 1670 was far more violent than a simple nova.

The visual appearance of the CK Vulpeculae nebula and the high velocities observed by the team could help astronomers to recognize relics of similar events — in our Milky Way or in other galaxies — that have occurred in the past.

Professor Banerjee added: “It is difficult at this stage to offer a definitive or compelling explanation for the origin of the 1670 eruption of CK Vulpeculae. Even 350 years after Voituret’s discovery, the nature of the explosion remains a mystery.”