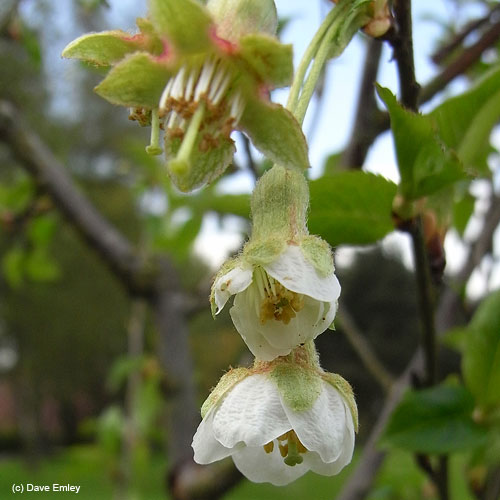 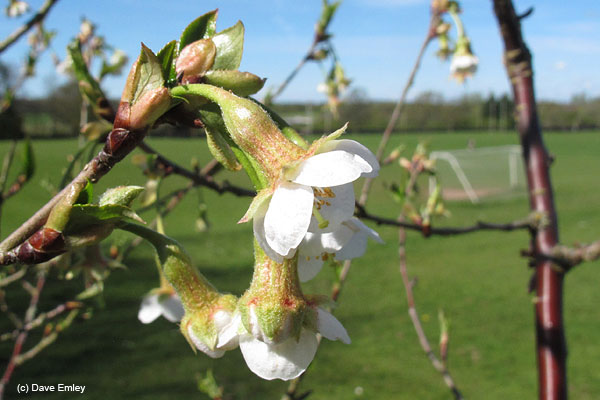 It forms a small tree up tp to5 to 6 metres (15 - 20 feet) high originating from the Eastern Himalayan region (Western Nepal, Bhutan, Sikkim, SE Tibet and Burma (Myanmar) at high altitudes (i.e. 3000 metres +) in sub-alpine forests. It is one of a group of very closely related cherries from the region: P. topkegolensis, P. harae, P. tapljungnica, and P. singalilaensis, all recently described. It is also closely related to the Tibetan Cherry - P. serrula and to P. himalaica.

Like P. serrula, P. rufa is grown for the striking attractiveness of its bark rather than its flowers which are rather insignificant. The bark is a shiny brown of various shades, often peeling into strips, along with prominent horizontal lenticles.

Flowers are somewhat small, solitary or in clusters usually white or sometimes pale pink on a calyx c.15cm long with rounded petals of similar size. They appear in May to June. The leaves are fairly small (to 8 cm long) elliptical to lance shaped with sharply toothed margins and characteristically hairy as are the flower parts. The young shoots and branchlets are covered with a reddish brown down

P. rufa was introduced into Kew around 1897 but has always remained scarce in cultivation. The cultivar at Keele has an interesting history. It has the collection number B.L.&M. 107, indicating that it was collected on the University of Bangor Expedition to Nepal 1971 by (Len) Beer, (Roy) Lancaster, and (Dave) Morris as seed. Roy Lancaster records that the seed was collected from around the village of Topka Gola (altitude 3871 m - 12700 ft), c. 40-50 miles ESE of Mount Everest, and that  trees were plentiful in the surrounding hills as scattered individuals. Unfortunately, only one seed germinated. It was grown on in the Hillier Arboretum in Hampshire; it is from this tree that ours were propagated as scions.

This cultivar has a dark mahogany brown coloured, peeling shaggy bark, hairy calyces to the flowers which are slightly larger than the norm. This accords with the f. tricantha of Bean (see the International Dendrology Society website - Trees and Shrubs online). It has recently been reduced to variety status.